I’ve never really warmed to Rolemaster’s archetypal blaster, the Magician. In the spirit of full disclosure, I should add that I’ve never liked any character that concentrates primarily on ‘blasting’, in any system, unless the blasting is interesting, like firing a swarm of wasps or an ethereal bolt that causes the target to blink in and out of their current dimension.  My problem with the Magician, however, is more specific: at the risk of sounding pompous, I feel that the Magician does violence to the richness and potential of the elements. One of the things I really liked about the Elemental Companion was the wide and fascinating range of elemental effects available to players (although the generic nature of the lists represented, I felt, an opportunity lost).

The thing with the elements is that they provide a window to a whole system of symbolism, psychology and metaphysics. I find myself thinking here of crossovers between the classical elements and astrology, elements and humoral theory, elements and cosmology (as per Thales, for example). If one accepts the idea of elements as metaphysical building blocks of varying complexity, and adds to that the notion that a certain level of mastery of a particular element in its raw form grants access to more ‘metaphysical’ expressions of that elements sphere of influence, then you can move beyond bolts, balls and walls to…anywhere, really.

So, what elements to use? Rolemaster has traditionally concentrated on the classical four elements with Ice and Light thrown in (more bolts and balls!). My own campaign’s take on this is that the classical four plus four others are the starting point and the basis of all further elaboration. The four other key elements form two dichotomies: one represents that between Law and Chaos, Order and Entropy, whilst the others could be represented by Death and Life, Good and Evil, Void and Being or Negative and Positive. There are also several anomalous ‘elements’ or forces that stand somewhat outside of these eight fundamentals. Here are contained such conceptual forces as Time, Mind, Dream and the binding/linking force of the Ether. 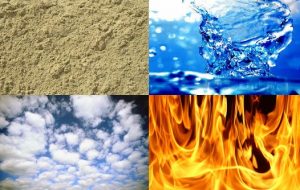 All of these elements are sourced from their own plane, a dimensional zone where they reign supreme, and each of these dimensions, whirling in the intricate and infinite geometries of the multiverse ‘rub’ against one another, producing small hybrid dimensions I call ‘niches’. Fire and Water, for example, create the Niche of Steam. The list of potential combinations is fairly large, especially given that each Niche can then contact each other, spawning ever more complex creations. The Niche of Wood is created by the intersection of Life, Earth, Water and Light (itself a product of Fire and Ether). When this Niche is then contacted by that of Decay (Time and Chaos), the Niche of Rot comes into being.

This is the general structure, but it has comparatively little bearing on the standard RM organisation of spell lists, which may be considered to operate at a level that does not require much knowledge or application of the underlying metaphysics. It is only when planar travel and specific summoning (“By all that is holy! This situation calls for a Rot Elemental!”) are required does this lore become a necessity, and only a few sages (and my updated version of RoCo IV’s Astral Traveller) are privy to it.

Back to the Magician: if the elements are as complex and fundamental as the above model assumes, then Magicians, as the primary manipulators of basic elemental matter, ought conceivably to have a command of both the aggressive/defensive manifestations of the elements but also the more metaphysical aspects of the elements. This degree and style of learning requires that Magicians have ‘primary’ access to one – and one only – element, in which they can potentially master all the power an element provides.  Thus a magician might specialise in Fire: they gain lists that manipulate the transcendent aspects of Fire (the chosen list here is Fire Law) and the immanent aspects. I used the list Fire Forms from RoCo VII and the list Fire’s Influence from the January 2009 Guild Companion. So that’s three of six Base Lists. I also gave them Elemental Summons (RoCo II), with the proviso that only Fire Elementals could be summoned using the list. Fire Magicians also gain a ‘metaphysical’ list linked to the element: I selected the Paladin list Inspirations (RoCo II) to represent the courage and inspiration that Fire grants. Finally, I gave the list Mage Sign (RoCo VII) to all Magician’s regardless of elemental selection, to reflect a basic training that all Magicians receive.

I did retain the six elements of the original Magician and added ‘Dark’ as a seventh – more because I wanted to draw on the existing material in the Core and Companions rather than spending the rest of my life concocting spell lists for all of the basic elements and the Niches. One of these days, I’d like to give the system my full attention and create a set of lists that appropriately reflects the juiciness of the underlying concept (without following the rather generic path of the Elemental Companion).

Today I’m looking at the ‘problem’ of skills in RM: consolidated skills (of which RMFRP is the paradigmatic version, and which appears to be a certainty in the new version, although with far less skills) or individual skills, each with their own development cost, as was the case in RM2. Let me nail my flag to the mast: I am rather more in favour of individual skill costs, primarily for the tremendous variety and granularity they offer. You simply can’t get that under the skill category system (although the RMFRP rules do allow a certain amount of tweaking, and my rather freewheeling interpretation of the talent rules enabled more).

Further to this is the issue of the dreaded skill bloat. It seems that many folks object – quite reasonably, I feel – to the tremendous explosion in increasingly fine-grained skills introduced by the RM2 companions (and carried over to RMFRP, although restrained and managed by the category system). I understand the objections: if you have, say, 300 skills and 50 professions, that’s a lot of trawling through tables in order to generate a character, and a lot of skills to study up on, in order to decide whether your Burglar is better off taking Defensive Manoeuvre, Feinting or Tumbling Attack, or just ignoring it all and retiring to a farm after buying ranks in Horticulture, Herding, Animal Handling, Animal Healing and Weather-watching.

But, and here’s the thing, I love having that range of options – ridiculous though that may seem – simply because of the ways in which, as a GM, I can fine-tune races, cultures, professions and NPCs. I can understand how you might justify having a Prepare Herbs, Herb Lore and Using Prepared Herbs skill, or a Using/Removing Poison, Poison Perception and Poison Lore skill. I can imagine a rough-and-ready soldier who knows nothing of herbs, but has grown used to applying unguents to wounds. I can equally imagine a scholarly-type who has learned a bit about poison but has never handled it – or even considered using it! That argument makes sense to me, although there is, conceivably, a limit beyond which realism need go.

There are ways of managing skill bloat without consolidating or eliminating skills. The last RM2 campaign I ran I divided skills into Core, Professional and Extra-Professional skills. Everyone, regardless of profession, race or whatever had instant and permanent access to the Core skills. Then, each profession had 25 professional skills to which they had access. All skills outside that group of Core + Professional were restricted, requiring the expenditure of Character Points (which accumulated as the character reached Prime Levels, of which more on another occasion).

I’m including a link to a table showing an example of what I did in my attempts to manage skill bloat whilst maintaining breadth and diversity. This is the RM2 Hunter from the Arms Companion. I’ve not included the development point costs for copyright reasons, but the table is hopefully sufficient to demonstrate the idea. The listed skills show those available to the Hunter at level 1. They can’t consider new skills until reaching their next Prime Level (i.e. level 3). At each Prime Level, a character gains Character Points equivalent to 3 + the modifier derived from their Prime Statistic (the first appearing of their Prime Requisites, in this case Quickness), as if it were a Power Point stat, rounded down. (For example, if Bhorg the Hunter has a Qu stat of 95, he’d gain an extra 2 Character Points, giving him 5 in total. Bhorg could then spend his Character Points unlocking access to an Extra-Professional skill, or buying talents, or saving them for later).

I thought it a reasonably elegant solution, although like all my solutions, it generated a fair amount of work to get it up and running. I’d be interested in your thoughts on possible futures for this approach, any problems you locate and any possible fixes.