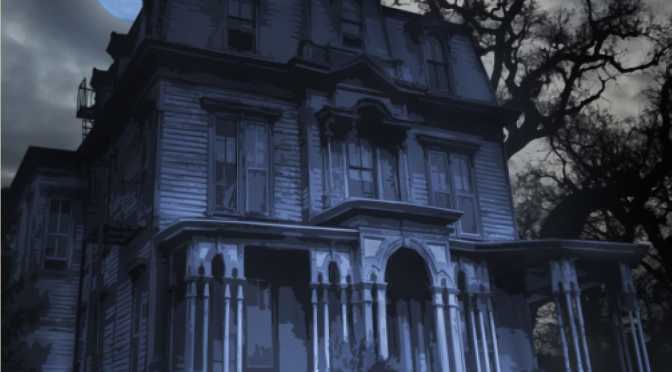 This is the third and final (at the moment) volume in the horror effects series by Azukail Games. This booklet (100 Creepy Things and Events to Find in a Spooky House II) has far less strange mists and fogs and noises in other rooms than its siblings but more architectural spookiness. You get more doors and windows that don’t go quite where they should, the classic branch suddenly breaking the window at night and other real Hammer Horror icons of the genre.

The production quality is equal to that of the other two ‘spooky’ publications and the content is equal, you get 100 special effects spread over 22 pages. Each is numbered so you could quite easily just roll a D100 or just pick the effect(s) you want.

The way that the events in this book are presented is very flexible, you get a lot of ‘if the players have lights then this happens, if they don’t then this happens…” sort of conditionals. This means that most of the events if not all will work even it things are not set up exactly as described. Afterall these are really just inpirations or as that horrible phrase goes “thought starters”.

Going off at a tangent; ever since I first saw the first of these books I thought that there was a potential adventure(s) in here for a rather twisted illusionist but I have taken that idea a bit further. The perfect villain is not not an illusionist but an Alchemist. A 8th level achemist with the following lists Organic Skills, Lesser Illusion, Rune Mastery, Invisible Ways and Essance Hand could prepare runes of light and sound mirages and telekinesis. These are only 2nd and 3rd level spells so the rune paper, which they could make themselves would only take a matter of weeks to create. If over the space of a year the Alchemist produced 10 sheets of 3rd level rune paper they could effectively ‘haunt’ any location they liked.

Illusions have a nice long 100′ range and using mostly sounds of thumps on the floorboards, screams and the sound of doors opening and closing etc. most of the atmospherics could be cast from rune paper at a safe distance. Telekinesis could be used to open or close doors or windows, again all from rune paper and from a safe distance. Once people are scared and running around looking for the source then a single invisibility spell and retire to safety.

Our alchemist could easily drive away peasants from a farm house and if people get brave or curious and start to come back then just throw more illusions at them. The rune paper is not lost when the spell is cast, it is just blanked ready for reuse. Our alchemist friend just has to recharge the runes the used. I would go so far as to say that because the illusions are not intended to last for ages, blood stains that appear and dissappear, a sudden scream from the attic and so on, attempting to detect essence is likely to fail as those spells detect active magic but the illusion is already over. Those higher level spells that can tell you what happened in a place in the past minutes or hours will not identify our alchemist as he is 100′ away and cast the spell into the attic but was never there himself. It is almost the perfect crime.  Once he is living in his stolen farm house then people seeing lights on in the place are quite likely to ascribe it to the ghost anyway. Should the alchemist be discovered then it is debatable from a peasants point of view which is worse having your house inhabited by ghosts or by an ‘evil’ wizard?

Someone in my games is definitely going to encounter this nasty little achemist.