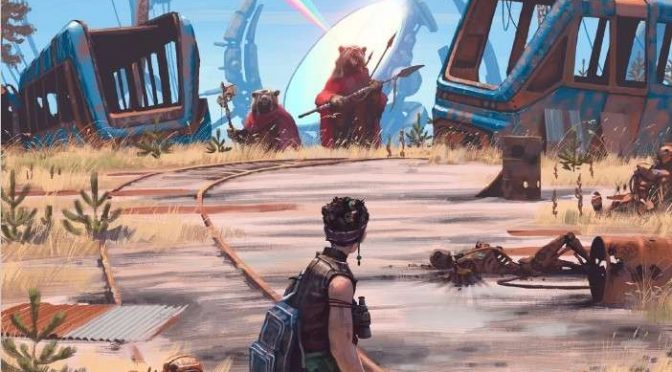 Is this the most awesome trailer for a role playing game you have ever seen?

To be honest I had no idea that people even made CGI trailers for rpgs! You can download a free sample of the game giving you character creation and an introduction (41 pages in total) here http://bit.ly/MutantFree.

The publisher must have thought of that too. So not only do they have the 41 page intro book but they also have a 66 page MUTANT: Year Zero – Starter Booklet.

Surely, that creates a funnel to draw people in? Hook them with the movie, give them a range of free material to get them hooked, let them play the game. Only then do they need to actually pay for the game book. At $24.99 it is hardly the most expensive game in the world and you do get a 269 page rule book for your money. So M:YZ is not a light game by any standards. Since the original release in Oct 2015 there have been 11 releases for M:YZ, so what is that, once every two months? Strip out the freebie intros and you are looking at 1 every 3 months. Oh yeah, there are just two writers and everyone else works freelance.

Here is something else. This is the hook or vignette as BriH blogged about…”She had wandered too far into the Zone. Tula had walked through the dark forest, followed the old rail tracks between crumbling ruins and rusting train wrecks, towards the glimmering silver disks by the horizon. She wanted to reach them so bad.  Become a hero of the Ark. A famous stalker. Now, she would be a dead stalker. If the thirst didn’t kill her, zone ghouls or the rot would. That’s when she saw them. Scattered across the ground like metallic rag dolls. Machine beings. Dead for decades. Tula had heard stories of them. What had happened here? Suddenly she heard a noise. Growls. Voices. Tula drew her scrap pistol and got ready to fight for her life.”

A strong female lead to promote your game? Welcome to the 21st century!

I think ICE etal. could learn a lot from M:YZ. How to entice people into trying the game, about 21st century marketing, about feeding the desires of the fans.

Now for a funny thing. M:YZ was first written in 1984 as a Swedish language game. It was somewhat niche due to the language barrier but it is of the same vintage as RM, has just gone through a reinvention, just like RMU and needs to reach a broader audience, just like RMU.

Are there lessons to be learned?

I personally don’t see the need to put character creation in the free sample or quickstart rules. I fall on the side of give them pregens and get people playing. That is about the only thing I would have done differently.

Finally, this is slightly worrying, the highlighting is mine but look at the feature list.