This is the last of the #RPGaDAY posts. My answers the 29th and 30th are pretty generic but skip down to the 31st for the best answer!

29th What has been the best-run RPG kickstarter you have backed?

I have never backed a kickstarter. I don’t think I would for an RPG either. I have nothing against kickstarter or RPGs but I just do not have the gaming group to buy games and play them. With my meagre collection of games I still don’t have time to play all of them so backing games just to get more games that will sit on a shelf and never be played does not make sense. If there was a decent RM based kickstarter then that would be a different case. I guess I am just not part of the kickstarter/crowdfunding sub-culture.

I have seen a lot of interesting things done with crowd funding. I also blog on Stargazer’s World and that is now patreon funded. The past time I look there were only three patreons paying $3/month. I think it is an interesting concept to pay bloggers to blog and one I think is a damn fine idea! Dyson Logos is patreon supported to produce his maps and that seems more successful running to hundreds of dollars per month.

Kickstarters though are just not may thing. What keeps coming up again and again is art. If you want to produce RPG publications be it rule books, companions or supplements then the one skill that almost all of us lack is artistic talent. This is where the expense is in producing professional looking material. This will come up again below in the answer to the 31st question!

30th What is an RPG genre mashup you would most like to see?

I have often done mashups, I mentioned my Doom/RM one off in a comment this week. I recently put my players into a classic night of the living dead scenario. I tend to think of these as really fun one offs rather than something I would like to play on a regular basis. I think the fun is in the shock or surprise value. Very soon either the joke wears off or gaps in the rules appear.  If you are playing something set in the wild west then you can build a very detailed representation of that genre. If you then try and stick space pirates in then it is harder to maintain a coherent world. Combat rules tend to break down when you try and model too many different types of weapons. If you look at the movie representation of a light sabre it does not behave like a sword, armour is not effective against it. If anything it behaves more like a D&D vorpal sword than a RM longsword.

I think the answer to this for me is I don’t know yet. The inspiration will grab me. If I am pressed for an answer I think I would like to do something soon involving Ninjas and Terminators.

This has to RMU. I don’t think it will be delivered this year but I would be very surprised and disappointed if it was not released during 2018. If I had to say I would imagine it will be probably just before Christmas 2018!

Now, this is not intended to be an ICE bashing but I am not impressed with the way the publish Beta but 1 & 2 have been run. There are a number of problems with it in my opinion and these have been brought into sharp focus this week when I saw another companies public playtest.

Part of the problems I think comes from ICE not committing to who RMU is being created for. It seems like they have tried to take good bits of RM2, RMSS and HARP and blend them together. The result is that the RM2 players miss the bits of RM2 that didn’t make the cut, RMSS players don’t like the bits that do not work like RMSS and HARP players don’t like the bits that are too crunchy for HARP. That is a generalisation but the principle is sound. The U in RMU is meant to be Unified but I do not see RMU unifying the RM community. I think RMU will be house ruled back into its constituent parts probably before it hits the shelves. Hurin will have his individual skill costs, I will have my minimalist rules, BriH will have his free market economy. Arms Law will be ripped a part and alternative tables will abound, and so on.

The real shame is that there has been no visible effort to engage the wider gaming community.

I want to show you how it could be done differently. There is a game called Eclipse Phase. It was released in 2009. Since its release there have been 70 additional books/publications. That is nearly 1  a month for 8 years. If we had had that sort of publication rate we would be over the moon. Ah yes you say, but ICE is only a small company, they cannot produce books like that. Posthuman Studios who make Eclipse Phase is just 4 people Rob Boyle, Brian Cross,
Jack Graham, and Adam Jury. The books they have produced range in price from free and PWYW and from $0.99 to $19.99. There is literally something for all pockets Take a look at their listing on RPGnow.

I would also argue that because Posthuman Studios has this terrific production rate, they earn more money which enables them to buy in the art and freelance page layerouters (made up word but I don’t know the collective noun for people who do page layouts) which enables them to produce more books. The more books they produce the more they sell and so on.

Now what is really interesting is that they are developing Eclipse Phase 2nd Edition right now. They have put an open play test out on RPGnow. Anyone can download the playtest rules. These are not hdden behind a NDA agreement and hidden forums. They want the game discussed in public.

When you download the open playtest you a set of PDF documents that are text heavy and lack art just like the RMU beta 2 books but you also get a pdf quck-start rulebook. This book would not look out of place on sale right now. It is beautiful to look at. The book is just 26 pages and includes a background to the setting, the core game mechanics, and full first adventure and pregen characters. Anyone could pick up that pdf, print it and be playing inside of an hour. 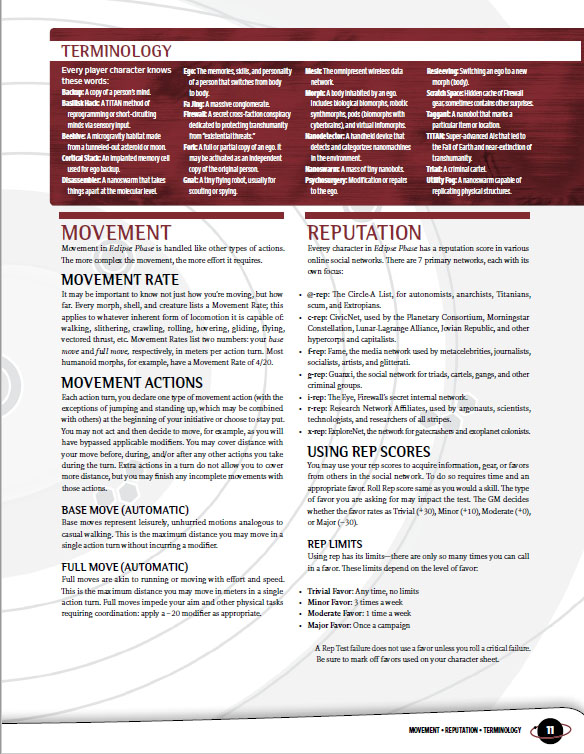 This is a page from the 2nd edition quick start. The actual pages are very light on the artwork whilst still being very visually attractive. You are looking at a single icon for the page number and a single page background image.

In addition the playtest files are not arranged at multi-hundred page PDF books. They are broken down into almost chapter sized booklets. This means that each part of the rules is easier to read and digest and discuss. Our mammoth books are not the easiest to navigate and the contrast is striking when you see it being done this way. Each booklet has its own public discussion forum, again not behind closed doors. I guess that by working on the rules ‘chapter by chapter’ they can be signed off and finalised faster.

The simple fact that anyone can download the play test for free and has everything they need to play the game means that the play test itself is bringing new players into the game. With the quick start they are up and running and with the beta rules they can go on to make their own characters and create their own plots and adventures.

I don’t mean to be down on ICE and RMU. RMU is my most anticipated game of 2018. The frustrating thing is though that RMU could have been on the shelves in 2015 and we could be anticipating its 5th birthday in 2018!