I know that many people love the minute detail that the full spectrum of RM2 professions provided. The professions were basically a package of individual skill and base lists.

Keeping the base lists within professionless and level-less RM is easy.

The individual skill costs are completely compatible with level-less but I am open to ideas about how to create that flexibility with professionless gaming.

BriH has pitched the idea of getting rid of skill costs all together so that every skill costs 5DP (I could be wrong about who came up with that idea but that is not the point). I was thinking of playing with the idea of going to the other way. 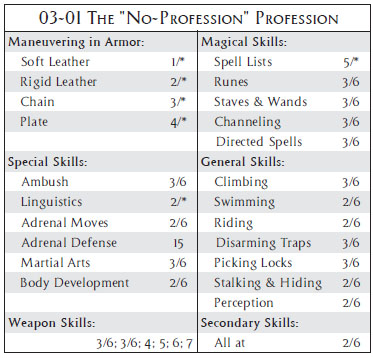 As you can see the standard No Profession  character doesn’t have any real strengths.

How about allowing the player to juggle a few points around? So let’s give each player 10 points they can move about to make some skills cheaper and others more expensive. If no skill could cost less than less that 1 point for the first rank and 2 points for the second and no skill can cost no more than 3/6. This stops players from ‘dumping’ points into a skill they have no intention of every buying.

I would love to have peoples opinions on this. If you like all the old professions would the option of tweaking the skill costs at level one appeal?

To make it fair when you are thinking about this you should bear in mind that all characters get 50DPs. You do not have to buy Body Development (that is free), there is only one armour skill that costs 2* and in total there are only about 45 skills not the 200 from all the companions. You need that to know just how far 10 points would go in tweaking those costs.

Do you think that will make PCs more varied and do you think it would help you build the character you would want to play? After all that is the whole point of having a detailed character creation process in the first place.