The title of this translates to The Black Pig and is the name of a sloop raiding the northern coastline of the Melos peninsular. It could of course be any coastline in any world. The language is Aioskoru Orcish courtesy of Ken Wickam (check out his blog for all things Aioskorunian).

The nature of these orcs is very much raid and move on. They are not interested in pitch battles but they pick on weak and defenceless coastal vilages where they can run amok. Occaisionally they will hide their sloop in a cove or natural harbour and raid in land. This is where the characters are to first encouter them.

How big an adventure you want to make this is rather up to you. If you want one pitched battle and done then allow the orcs to be caught easily and quickly, if you want to taunt your characters then they can be much more elusive.

The Rolemaster Creatures and Treasures book gives standard stats for a lesser and greater orc but also the rules to easily shift the creatures up and down in level and this is what I have done to create the crew. The orcs of the Kukiav are all greater orcs and one of them is also a spell caster (a 7th level sorcerer).

So first of all lets look at the crew of the Kukiav.

I am not going to name them because they are orcs and orcs exist to be killed not for their conversation.

First up is the sorcerer. There is one major consideration for the GM here. I use the optioal rules for Ritual Magic. If you allow this then This orc can call upon much more powerful weather magic, scrying and illusions at not much risk given enough time and preparation. The ship will have ritualistic markings on the deck where these rituals take place and the sorcerers quarters will be protected using waiting phantasms. the scale and magnatude of these are very much up to the GM. I now use the RMU ritual rules but the original ones were from Companion III. If you allow the use of rituals then this orc will have made his foci (a harpoon) and should be considered to have a +60 skill in ritual magic taking into account he skill, level and stats.

Subordinates. There are two greater orcs with the standard RM stats (4th level, 70hits, AT17, 40DB) What makes these two stand out is their armour and shields. They killed a pair of soldiers once and both have matching bronze breastplates and large black shields embossed to look like screaming faces.

The crew. This is another five greater orcs armed with broadswords and bucklers and harpoons as back up weapons.

The entre crew are competent sailors now, having raided successfully for a coupleof years. This has often been added by the use of illusions such as a barn fire away from town that draws all the men folk away before the orcs pull in to the harbour. The ship looks well cared for and in good condition, work carried out by captives before tey are eaten. The orcs are also partial to a bit of piracy if the opportunity presents itself and will use any advantage they can get. They will given the choice fight on land as they are all wearing metal armour and are fully aware that they sink! 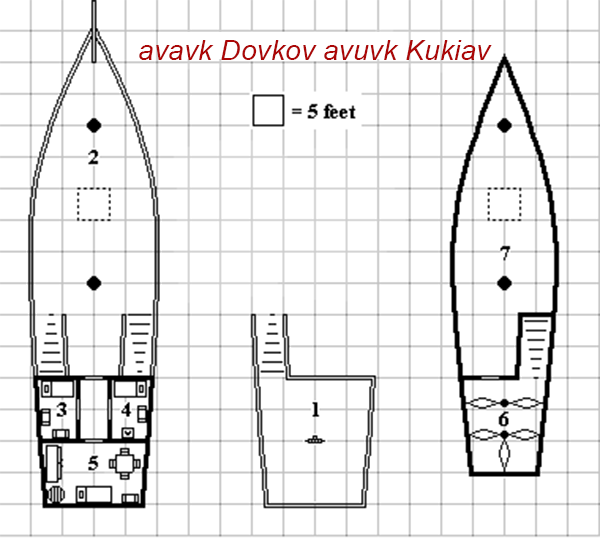 Playing the Kukiav and its crew.

This could easily be a single one off encounter or a device for giving the characters a boat if the greater plot calls for it. i think it works better if the orcs are allowed to out fox the players. Let the sorcerer use rituals to spy on the characters once they know they exist and maybe over hear plans and then take advantage of that knowledge. If the characters have no way of following the ship out to sea then allow the orcs to escape on their ship and taunt the characters. If the characters try and use magic to attack then the sorcerer will try and use spells like neurosis to create an irrational fear of orcs or of water. If he is able to possess a character and start an in fight that way then that will serve. He will resort to throwing waterbolts as an absolute last resort as he knows he does not have enough power to last in that sort of fight.

If the characters become a major threat to the orcs then they will do their best to be where the characters are not but at the same time will try and taunt the characters by leaving a victim alive and then saying the raid is retaliation for the characters actions. remember the sorcerous orc loves fear and deception and with soul destruction and illusions both are very very real!