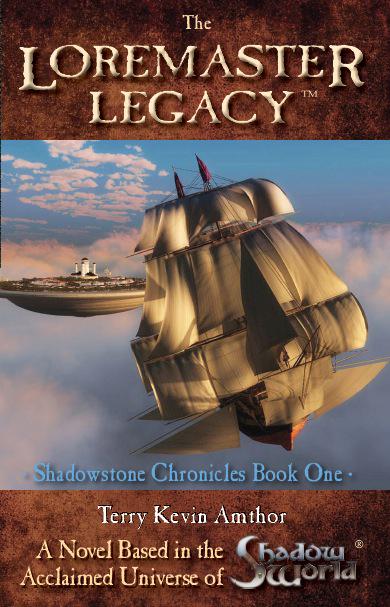 It seems like a lot of the fantasy fiction I have been reading lately has been more about relationships against a fantasy background that the hack and slash of yesteryear. In the same way that Trudi Canavan explores relationships against the backdrop of the magicians guild in The Black Magician Trilogy and other works so it is with Terry K Amthor’s Shadowstone Chronicles Book One The Loremaster Legacy.

The work itself is a coming of age story of two young nobles who get caught up in events beyond anything they had imagined. As the first book, in an ongoing chronicle, this book is very much about their beginnings, finding their feet in the world and discovering their talents all while events threaten to over take them.

The fantasy world setting for the novel is of course Shadow World and as readers of this blog many of you will be somewhat familiar with the setting. From that point of view I think the Loremaster Legacy brings that world to life wonderfully. You get to meet or at least see at work many of the great figures of Shadow World as well as glimpses of the technology that lurks constantly in the background. In many ways this book is as much science fiction as it is epic fantasy.

As a novel it is easy to read and is engaging and as the first instalment of a series it leaves a great many hanging threads and unanswered questions. You do get to meet the Loremasters, Priest of Arnak, Dragon Lords as well as characters from off world which goes to demonstrate both how rich a world setting Shadow World is and the scope of the chronicles to come.

I have read the book twice now and I am impatient for the second part. My only criticism is that the book introduces a substantial cast of characters and at times it can be confusing as to who is who, Jad and Tad were the two that had me confused for a page or two) and a few of those characters leave little lasting impression. That aside this is a damn fine book.

If you are a gamer in Shadow World then I would say this is a must read book.

If you are a roleplayer of any genre then you will certainly identify with the central characters as they start their careers.

If you are neither then why are you reading this blog, although you are welcome of course.

Terry K Amthor’s The Loremaster Legacy is available on Amazon here as well other online sites.