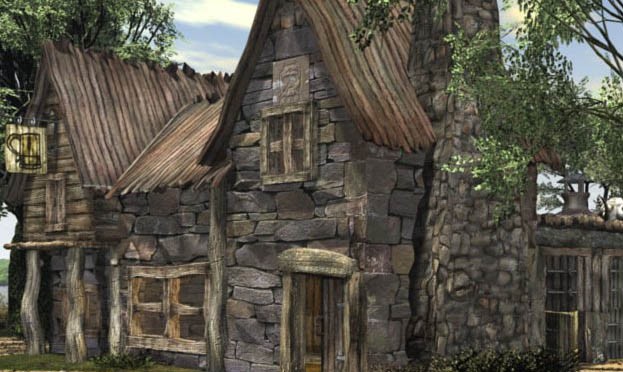 When I build anything from towns to taverns I always start with the people. Once I have created the people who provide the essential services to make the location work and then add their families I have a rough working population. That then tells me how large a place it is. In a tavern you need the landlord or barkeep, a chef/cook, a server or two. In a small out of the way place that could be a husband and wife with their own children or they could be staff and unrelated. What makes taverns though is the client base.

My first thought, inspired by the news that they are going to start filming the next series of Poldark this month was to have a couple of smugglers conspiring at one end of the bar. Whether any of the drinks being sold are contraband or not depends on the landlord I suppose but smugglers are a good way of introducing a sub plot.

Taverns are resting stops, the motorway services of their time so you are highly likely to encounter a royal/imperial dispatch rider or messenger or even two going in different directions. These two would have a natural affinity and are likely to be sharing what new and gossip they personally know regarding their missions even if they do not know the contents of the messages they carry. If something were to happen to one or more of these and the message simply had to get through…

Merchants are not that likely to sleep under the stars and depending on the nature of the world are likely to have a few guards or men at arms with them. Now whether they mix well and get on with their men at arms or not is a different matter. It may be that with those men at arms it has been nigh on impossible to rob any of these merchants on the road but now they are sleeping inside while their wagons are secured outside opportunity knocks.

I can also imagine a foolish young man showing off some valuable item for too many people to see. Maybe a jilted lover drowning his sorrows and showing off a betrothal ring to anyone who can answer why she won’t defy her father?

I think all of these are run of the mill and happening in every tavern in every game more or less. So what about some other less obvious adventure hooks?

So all of the above are happening in the tap room most likely but what about some fugitives hiding in the cellar? Why are they hiding? Probably because there is a gang of ruffians holding a dog or cock fight in the centre of the cellar. the ruffians are part of the smugglers crew who are too well know by the local law to drink in the tap room. There is of course also a secret passage from the cellar to either out on the road or down to a cove depending if the tavern is by the coast.

If any weapon is banned in the realm chances are there is a crate full of them down here somewhere. In my world swords carry a 1sp tax for any blade over 12″ long to try and discourage people carrying too many weapons. All it has achieved is to make 11″ daggers popular, made thieves conceal their weapons and created a black market for untaxed blades.

So that is the basement pretty full what about upstairs? The roof is where the homeless would often choose to sleep. They are out of the way of the law who may try and move them on. Heat rises so it is warmer than a doorway.

The attic is a really good place to have a secret meeting, hide bodies, store your deceased mother and her rocking chair and perform ritual magic and summonings. This would means that there is probably a dodge spell caster staying in the tavern. We may have met him or her in the tap room earlier or they could be keeping themselves to themselves in their room.

And so to the private rooms…

The best place to meet a thief or cut throat has to be when they are coming out of *your* room. At least at that point you can be pretty sure they are not just accidentally carrying off your saddlebags.

If the walls are pretty thin and you can hear everything then having someone performing an incantation or ritual all night and keeping the players awake is always interesting. If the party can identify it as some kind of ward against evil it is hard to complain about someone trying to keep you safe!

On the other side of the players room you can have two guys arguing, one plotting to murder a tyrant and the other against violence. This works well if at breakfast the next morning it turns out that the two people from that room are twins. Which one is the potential regicide and which is against it?

There are so many ways of offering your players adventures that this is just a selection of ideas I have had today. Any of these could spin off into a evenings diversion or a major adventure. It is up to them and you.