I have a party of adventurers clearing out an underground complex. Most of the fighting has been sword on sword against intelligent foes. In the first session of the new game we only had three PCs and no NPCs. There will be another regular player who could not make the first session so we have four PCs. I want to introduce an NPC to the party.

As a GM I am not a huge fan of NPCs in the party. I don’t do accents so they can become a bit bland and I have seen NPCs save the entire party when they got themselves stupidly slaughtered (I was one of the party in most instances of this) and it begs the question of why didn’t the NPCs just do the job without the party in the first place.

I also dislike the NPC healer as that just encourages either the GM to fix things when they get broken or for the party to be completely wrecklous in their battles. Why not the NPC will sort out the mess.

I don’t like NPCs who end up as mouthpiece of the GM proding the party in the right direction when they get stuck or coming up with the right solution just as the party are about to get themselves killed.

You can gather I am really not a fan of NPCs but this time I think the party needs one. The great thing is that the main healer is one of the party and of the three party members so far all three potentially have access to healing magic to a lesser or greater degree. Theymay not know the spell lists yet but it is always there as an option.

As I have a new PC entering the story I am temped to give him a twin sister. This one is slightly damaged and knows no other languages than a ‘twin’ language that only she and her bother know. That gets me off the hook with the NPC being asked to come up with ideas and I have been know to even forget there is an NPC in the party for hours at a time so if she is effectively mute then so much the better.

So I have been toying with this idea of the hardly ever speaking twin sister of one of the heroes. I have a few ideas for her and as I have been bringing them together then quite an interesting character is emerging. So why would a hero take his slightly damaged twin sister out on monster filled adventures? Because they fight really well together is my answer. So I have to make her really useful to have around in a fight but I don’t want her to be killing everything and making the party redundant. So how about makingher defensively really strong? There are some nice parrying weapons in Arms Law like the Shang, a parrying scimitar.  When not used to attack it gives +30DB. So a Shang in one hand, a small shield in the other, a bit of a quickness bonus and you have a DB of nearly 60. Not that impressive. Now I noticed in Arms Law that there are descriptions of how many attacks a person can do in one round depending on what weapon and shield combinations they have. The most extreme is probably the single handed weapon, thrown weapon and shield. The idea is that the attacker can swap their weapn into the shield hand momenarily, throw a knife and the get back into position to defend with the shield. There are minuses on both attacks (-20 on the single handed attack and -20% on the thrown attack).

We are probably all falimiar with seeing Broadsword (LH) as a skill as the player is learning the weapon as part of a two weapon combo. Why could I not learn Martial Arts (strikes) rank#1 (kicks only). So this character is going for the kick boxer look. I wouldn’t have a problem with that if a player came to me with it.

Going back to Little Miss Defensive (LMD) and now we have a Shang in one hand, a small shield in the other and martial arts. (in our gaming circles we call skill ranks ‘boxes’ after the record sheet so that is what I am going to use here.  So lets give LMD one box in martial arts kicks at adolescence and another at appenticeship and a +15 stat bonus. That doesn’t seem too excessive. Total OB +25. She can parry with that, not attack with her Shang giving another +30DB, her small shield gives another +15DB and lets give her a reasonable Quickness and now we are looking at a total DB of maybe -90. that is a fairly hefty DB for a 1st level character. I would give her at least one box in using the Shang but the total development cost is one box a level in martial arts and a one off purchase of a box in shang. She is not going to attack with the Shang so I don’t feel the need to buy two weapon combo. I am not buying any armour skills so the total cost is pretty small and I have not really reduced my choices in character profession either. 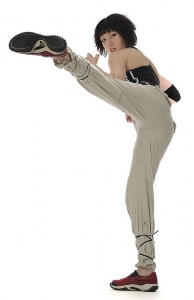 So so far I have LMD who parries away like mad tying up the foe while her brother does the killing. That works. There is one particularly cinematic shot that I love and that is the martial artist with their leg elevated in a poised round house kick slowly uncoiling and standing at ease if you know what I mean.

I have not go so far as to rolling any dice yet or developing LMD any further yet but if any other GMs read this would you allow a character to use a parrying wealong, a shield and attack with a kick all in the same round?

4 thoughts on “How many hands?”