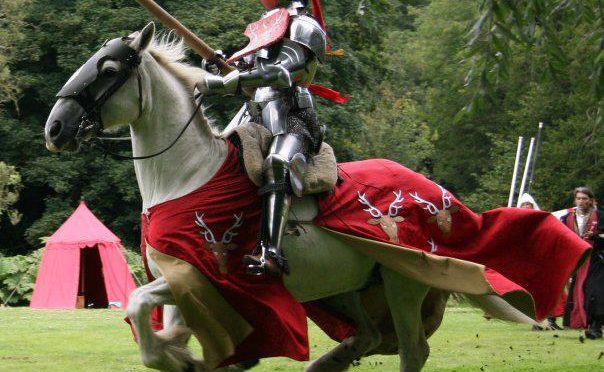 Or how many times can you roll the same skill in the same round?

In a recent forum post there was a reference to mounted combat. The horses were all fast moving, galloping around and their movement rates were huge, in the order of 400′ to 500′ a round.

This is partially a problem with 10 second combat rounds. If two combatants were in melee range at the end of round 1, eg the clash of lances in a joust then 10 seconds later they could be 900′ apart (500′ + 400′). Try using a battle map for that! I for one would need a bigger dining room table.

My suggestion was partially prompted by my recent reference to car wars in the #RPGaDAY posts. If you break the horses movement down into second by second movement over the round and only allow a single melee or ranged attack per round you can more easily manage the scale of the movement.

The problem then becomes that Player 1 sees an NPC wheel their horse off to the left so they change their direction to intercept cutting inside to take a shorter line, the NPC then bears to the right hoping to wrong foot the players horse. This is now much more exciting for everyone as they can move their horses strategically, Fred can try and lead an NPC on until he is right in Ernie’s path as Ernie lowers his lance and spurs his horse up into a final dash.

So when do you make the riding roll? If the players are making 10 strategic decisions about their horses movements which manoeuvre calls for the roll? How about perception rolls? If I am trying to shake you off my tail as you are closing do I need to make perception rolls to see you over my shoulder?

You could make one riding roll at the beginning of the round and have that effect the pace of your horse. On the other hand that does not reflect how your horse is handling. If you are not completely in balance with your horse it may ‘fall in’ or ‘fall out’ of a corner. Falling in is where on a corner the horse suddenly cuts in and across the corner rather than on a smooth arc around the bend. Falling out is rather like drifting a car, the horse is travelling both forward around the arc and stepping sideways at the same time. These are caused by the horse trying to step under the riders centre of gravity so if you lean a little too much one way or the other the horse tries to compensate for that. In a chase situation how the horse handles bends and corners can make a difference when trying to get away or make up ground. Flip that around and a poor riding roll should have a reflection on how the horse handles.

If I am making a single riding roll at the beginning of the round and I know I have made a poor roll I could choose to do only the simplest of manoeuvres in that round.

What if, on the other hand you played the mounted combat out second by second and allowed multiple riding and if necessary perception rolls at a strategic level?

This is where the car wars reference comes in. Each turn had a difficulty factor from D1 for a simple 15° turn to D7 for a bootlegger reverse. Each manoeuvre reduced your handling class by the D number and you then cross referenced your current handling class with your speed for the target number for you driving skill.

So you could let the players describe their planned moves and give each riding manoeuvre a difficulty using the regular RM difficulties, they make a skill roll each second but with an accumulating penalty. A highly skilled horse person could then lead a lesser skilled rider a merry dance or even put them well outside their comfort zone and outside their ability if they wanted to give chase or overhaul the other horse.

So each manoeuvre moves you further and further down the table, so two routine moves would result in a light manoeuvre.

As Brian said recently, players love to roll the dice. So giving them more rolls in a round as they try to out race the enemy is not necessarily a bad thing. It does break the 10 second round though.

I also think it will cause havoc with the RMU action point economy. APs tend to imply an amount of time. A fast 2AP attack will normally take place before a full 4AP attack. That makes it seem like each AP is 1.25 seconds long.

So would you be prepared to try this style of mounted combat?

17 thoughts on “How many skill rolls?”