As part of my cataloging all things Shadow World in our Master Atlas and indexing for the “Nomikos Library” project, I thought I would start a new blog topic: “Naming Things in Shadow World”. Today I thought I would start with named Demons that are mentioned in various SW books and are considered newsworthy in the timeline or elsewhere. Like the Dragonlords, powerful Demons play a major part in the SW history and are still major forces to be reckoned with!

While the book that started it all, The Iron Wind, is really a proto-SW product, most of the content continued into Terry’s later canonical material. Unfortunately, unlike Cloudlords, The Iron Wind never received an update due to authorship and IP issues around Peter Fenlon’s authorship. Nonetheless, I believe that The Iron Wind sets the tone for a darker, more menacing tone for Shadow World. In this product we learn about two powerful Demons: Susymog and Aztaur.

Susymog. An Ordainer Demon, he is lord of Var Ukaak and master of Priests of Arnak. He is also 50th lvl and secretly the Syrkakang. Elor was right to avoid this confrontation!

Aztaur. Master of Taurkytaal (K. “Dark Ice-stone”). Aztaur is known as the “Lord Demon of Cold” and “Beyond the Pale” (which had slightly different meaning than later SW book). At 30th level he is quite powerful.

Khortus. It’s unclear what type of Demon he is, but he was drawn into Kulthea by a sorcerer but was able to escape his spell bonds and “decides to remain in the Shadow World“. {see by notes on Summoning}. Anyway, Khortus is really up to no good, and now leads the Vulth Horde.

Muarga. An Earth-Demon who is the King of Murlogi battling the Lankani and embroiled in various high-level plot points in Shadow World.

Mæzebrasân. A female Demon that entered Kultha via a portal, she is now disguised as the Mayor of a small village in Sarnak…

Kharuugh. More of a historical figure, Kharuugh the Ordainer battled King Hanreth (wearing the Wyvern Crown) during the Wars of Dominion, his whereabouts remain unknown…

Quard and Urno. Demon servants of the Dyar Mage Shanarak. They are entrusted with guarding the Ark of the Worlds! (they must be powerful)

Orlhach. An Ordainer Demon that resides in a volcano in Kailoq, he is worshipped by the inhabitants as a fire god.

Gorlhach. At first I thought this was a mispelling of Orlhach, but no. (maybe a brother?). This named Demon lives under the Mountains of Gold and controls an army of Lugroki. He may also be known as the “Ordainer of Argaath”, but it’s a bit unclear.

Wargur. The Demon lieutenant of Schrek. Was banished to Rael after being defeated by Sigrius.

Raathmaauriig. An Ice Demon, he is the half-demon son of Aztaur. Has his claws in all sorts of things up in Saralis.

Vargus. A Demon Lord that resides in the Hall of the Cloudlords.

Gha’ath’uk (also known as Gha’ath’uz). A Demon of the Void, a Guguth, from Folenn. He has a Compass surgically mounted to his skull!!

Mauk, Geth and Wrang. While they sound like “sidekicks” they are all powerful Sixth Pale Demons that reside in Aalk Athimurl.

Morloch. I saved the best for last. Perhaps the mightiest, he is named Lord Ordainer and was once known as Shuraax the Fire Claw and bodyguard of Kadaena. Morloch is featured quite a bit in the story of Shadow World and I use him extensively in Priest-King of Shade. There is even a cult in his name!

Wurliis. Not sure how I missed this, thanks Alan! One of the 12 Adherents, Wurliis is a Demon of the Fifth Pale.

Wurliis is a master of arcane mechanisms. His favorite weapon is a terrifying device which fires four heavy crossbow bolts in a volley. Wurliis is somewhat smaller than most of his Demonic type…

Turasoq. Another Adherent and a Procreator Demon.

If you like to use Demons as big baddies, some of these may work well. Have you used any of these in your game? Did I miss any? 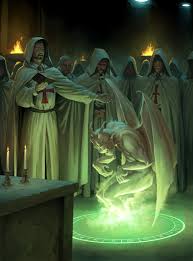