I am possibly the most un-musical person you will ever come across. I own virtually no music and what I do own was, with one exception, bought for me by people who don’t really know me. The one exception has a funny story attached but that comes later. I can only assume that I don’t hear music the same way that other people hear it. For me music is simply noise and has no more merit than someone trying to talk over the noise of a hair dryer or shouting over the sound of road works outside.

So it is funny story time.

So I was on the train coming back from a gaming weekend when the train pulls in to Plymouth (of pilgrim fathers fame). The four seats opposite me are then filled by four clinically obese ladies, tattooed and dressed like teenagers. They are rather drunk and still drinking. They are also extremely loud. They had been to see the Chippendales and were were variously expounding on what they would do to any or all poor Cheppendale if they got them alone in a room.

My ipod is mainly filled with BBC Radio4 comedy and this was insufficient to block out the horror assaulting my ears. I turned to my phone and Google Play and found Pink Floyd’s Dark Side of the Moon was a free ‘album’ of the week. So I used Pink Floyd to drown out the auditory hell that was my railway carriage. I can testify that Pink Floyd use way too may really quiet and long intros to songs! I really wish I had bought something like Never Mind the Bollocks, it probably would have been a better choice.

Azukail Games has given me another new toy to play with in the form of the booklet 100 Creepy Things and Events to Encounter Outdoors a sibling product to http://www.rolemasterblog.com/100-creepy-things-events-find-spooky-house/.

Azukail Games aim to, in their own words, “Publishing RPG Supplements to Help GMs” and their supplements normally comprise lists of really useful things that normally a GM has to come up with off the top of his head. These could be NPC names, tavern names or books on the shelp of a library or in this case 100 Creepy Things.

The elements in this work are not confined to your typical haunted house so you get sinister mists and fogs, my favourite is a stray dog who’s lead ends in a bloody tatter s on. There will inevitably be some cliches in here as any collection that missed them out would be blatantly incomplete but there are enough things listed to keep it fresh for a long time.

If you are not running a horror based campaign then you will not be dipping into this week in week out but the whole point of just about every one of AG’s resources is to have them to hand for when you need them. Right now this supplement costs just $1.59 on RPGnow and it is definitely worth that and more. There is a huge potential here to use each and every one of the 100 events as the jumping off point for an entirely new adventure! 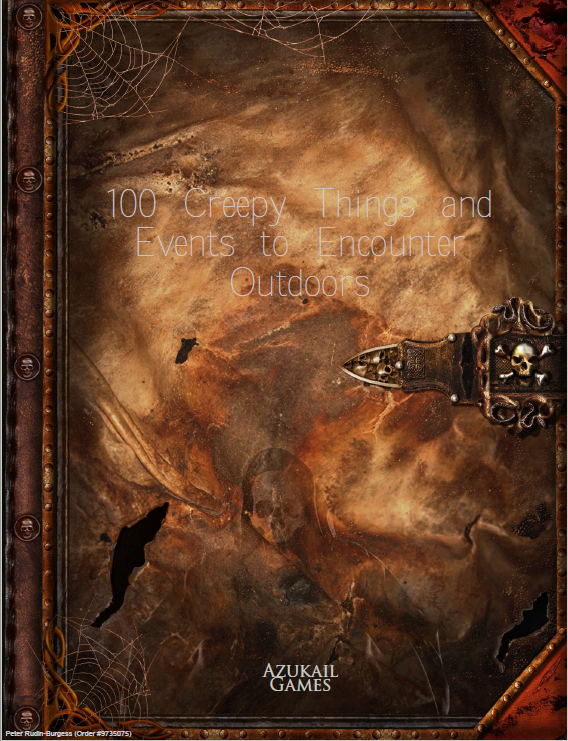