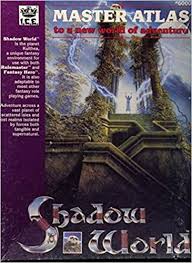 From the earliest days of the 1980 World of Greyhawk Folio, it’s been expected that comprehensive fantasy settings include a “Master Atlas” or a “Gazetteer” to set the tone and include fundamental information about the world. Nine years late, ICE introduced Shadow World: Master Atlas Boxed Set.

The first Master Atlas set the stage for the new Shadow World line–an expansion of the original Loremaster Series published between 1980-1984.  SW was now a professionally published product with a glossy presentation. The original boxed set included to books: the World Guide & Inhabitants Guide plus a poster size color map of the hemisphere. It was a great start to world building, but it never felt complete until combined with Jaiman: Land of Twilight and Emer: The Great Continent. Between those 3 products (all written by Terry Amthor) a GM could piece together a coherent and in depth profile of Shadow World augmented by the original Loremaster books (Iron Wind, Cloudlords of Tanara & Vog Mur). Since then, Terry has expanded SW Canon with 3 Emer regional books, Powers of Light and Darkness, 2 city books (Haalkitaine & Eidolon) plus Xa’ar in NW Jaiman. In the queue are Wurilis (NE Jaiman) the final Emer regional book and a re-write of Jaiman. Once those are completed, GM’s and gamers have an extremely robust overview of the two “main” continents: Jaiman and Emer.

It’s difficult to say if Terry will ever be able to tackle a third (or more) continent in such a comprehensive way with multiple books, but no one could argue that there isn’t enough material for years or even decades of game play with existing Shadow World material. And even with all the current SW books, both Emer and Jaiman have plenty of room for new material, short adventures, city books  and smaller regional supplements.

However, despite 4 editions of the SW Master Atlas, these books are hardly comprehensive. “World” level information is often found scattered throughout the other regional SW books, important cultural information is left unaddressed and various topics could use more campaign level information. In Pt. 2 and Pt. 3 I covered a number of these items that could be included, but I thought I would print off the Table of Contents for my own “Master Atlas” to show what could be in new version. I actually have 40-50 more pages that I haven’t incorporated into the master file, but this one is 281 pages.