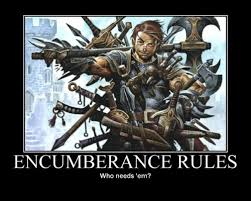 While both encumbrance and fatigue are critical elements in our game it’s always added an extra step of record keeping that was onerous. We’ve played around with several mechanisms but found that the new piecemeal armor and fatigue rule in RMU work great but we’ve taken it one step further.

First, we’ve eliminated the Maneuvering in Armor skill. I’ve always had an issue with it in concept and it unnecessarily complicated encumbrance rules by having this “dual path” calculation of min/max armor penalties, encumbrance by weight and the Quickness penalty. Since MnvArm is a skill that basically ties a characters ability to wear better/heavier armor to their level. I’ve heard the argument that it’s “for game balance”—I think that’s absurd. Can you imagine a game system that says a fighter can only use a dagger at 1st level, then moves up to a short sword, than a long sword and finally at higher level can use a 2-handed sword? That’s the same thing.

I’ve always seen armor as a “handicap”—it adds weight and restriction of movement. There are benefits (protection) and negatives (penalties) that a player has to balance out. I don’t think it’s something that’s “trainable” like other RM skills. Getting rid of MnvArm eliminates a skill (good) and eliminates the dual process of armor penalties & encumbrance calculation.

Second we’ve adopted the RMU encumbrance calculation as a % of body weight and applied adjusted %’s to armor pieces. I’ve inserted the table below. For example, a character wearing full plate would have an armor encumbrance penalty of 66% (Plate 40, Plate Sleeves 8, Plate Leggings 12, Full Helm 6). We’ve also added some armor penalties for Perception and Missile weapons. This simplified armor/encumbrance also makes it easy to create new armor types for cultures or materials.

With armor simplified, encumbrance becomes a pretty easy calculation. Tally total weight, convert to % of body weight, add armor encumbrance % and reduce by the weight allowance. I like encumbrance to have a real impact and armor should have appropriate draws backs to reduce the incentive for everyone to wear the heaviest armor. For weight allowance we use a much lower threshold than RMU: 10% + str bonus. So a character with 100str could carry up to 25% (10 + 15 assuming no racial Str mods) of their body weight before incurring penalties. That makes sense to me—a 200lb person could carry 50#s without penalty. If anything that’s still too generous. If that character were wearing Full Plate and carrying nothing else they would have a 41% (66-25) encumbrance penalty. For GM’s that want to lessen the impact of encumbrance just use a higher weight allowance: 10% + Str bonus x2 or even x3.

Finally because we have one simple encumbrance number that represents carried load and armor it can be applied in a variety of ways.

Calban attempts to somersault over an opponent. In addition to difficult modifiers and his acrobatic skill bonus the attempt will be modified by the -37% encumbrance penalty.

Calban is required to make a fatigue roll—it’s modified by -37%.

Calban wants to sprint x5. His base rate is 20’rnd so he’s attempting to move 100’ but the distance moved is reduced by 37% (63’) due to his encumbrance penalty.

Calban has a -10 DB which is cancelled out due to his encumbrance. Optionally, if a GM wants encumbrance to have an even greater impact than his DB would be -27 making him easier to hit due to his lack of maneuverability! (does that sounds harsh? Keep in mind that he’s basically carrying a 134lbs load).

For our game these rules work great.

To aid in record keeping we have a game work sheet for each player that tracks encumbrance, hits, damage etc, In the margin of the worksheet we include a chart to convert total weight to % based on the characters body weight. We usually round off the penalty to simplify even further. Most of the players can separate out their kit so in combat they can drop a pack or sack and immediately have and know their adjusted encumbrance.