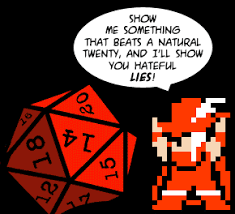 We’ve spent quite a bit of time deconstructing Rolemaster, analyzing RMU and trading thoughts on various house rules.  One thing is evident, that while some tinkering may be necessary, the critical charts are the core of RM differentiation and perhaps the most beloved mechanic of the system.  I think these critical charts work so well is that they provide expository for combat damage. Where most early RPG’s relied upon simple hit damage, critical charts allow a GM to provide flavor to the combat without having to ad lib damage effects. So while some see charts as crunchy or clunky, I see a powerful tool for combat narrative.

A year ago, Peter blogged about the RM critical charts, but I wanted to take it one more step–how do the original critical charts stand up after almost 40 years?

The 3 basic weapon critical charts are the Crush, Slash and Puncture that elegantly handle the imaginable ways most weapons can deliver kinetic damage. More importantly, almost any damage delivering device a GM can think of (traps, spell effects, environmental) can probably utilize these 3 core crit charts to model effects. I can’t think of any other critical types that are needed, nor why any of these three are unneeded. They stand the test of time. A+

The next three important critical charts are the Heat, Electricity & Cold tables. While they provide the basis for the Magician spells, they can also be used for extreme environment effects (magma, blizzards, natural lightning etc).  A+

Martial Arts. Of all the attack forms, having cool martial arts requires a novel mechanic. Again, while basic damage delivery is mundane and uninspiring, critical charts provide the  cinematic approach that brings unarmed combat the “fantasy movie” treatment. I’ve played Monks in AD&D–besides the special level abilities, the damage delivery is as boring as all the other weapon attacks. A

So what other Critical Charts remain that I don’t use?

So of course there are tons of other critical charts found in Companions and Shadow World books. They are a great add-on and cool but are there any that should be “Core”? I have 3 that I use that compliment the 8 I use from above:

Stress – Mental. I use this for mind attacks, spell failure, concentration issues, time or dimensional travel, meditation or even secondary fear effects.

That’s it for me — 11 perfectly distilled critical charts that handle almost any situation or damage effect. This of course excludes unique spell crit charts (nether, plasma) that I might use in special circumstances or is required by a spell list.

What do you think? Did I miss anything that could be “Core” or one that is widely useful that these charts don’t address?