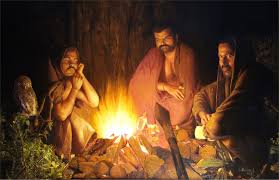 This is pt. 2 of an ongoing blog segment on Rolemaster “skill consolidation. The first part on the Channeling skills can be found HERE.

While character differentiation is important, the absorption of secondary skills into primary skills caused not only skill bloat but also a huge disparity in the value of various skills. For our game, one of the most effective consolidations is the use of the “Survival” skill. Depending on the environment, the Survival skill rolls up quite a few useful, but minor, skills: foraging, fauna or flora lore, bribing, hunting, tracking, weather watching, trap/snare, fire starting, shelter building, etc. None of those skills are learned in a vacuum, but are part of a larger survival skill set. Since we use cultural skill sets for adolescence, PC’s will have several ranks of Survival skill which encompasses the environmentally appropriate sub-skills.

At first, one of the biggest push-backs from my players was the elimination of the Tracking skill. Tracking has long been a main-stay in RPG’s, a core skill for a Ranger and a primary skill in the original RM rules. Probably a result of the Arathorn’s tracking the Uruk-hai and Gollum; key plot points in the story. In fiction, the tracking skill is used to great effect as an expository device but I’ve never found it of great use in any of my campaigns—at low levels the skill is somewhat ineffective and at higher levels spells can replace the skill.

But again, we didn’t eliminate the Tracking skill, just de-emphasized it as a stand-alone and made it part of a broader skill. There is still a bit of an arbitrary nature in our survival skill but as a few examples:

Much of this is common sense and the PC’s efficacy will of course be driven by their skill level. Any of course with “Meta Skills” there can be cross over with other skills like vocations: “Huntsmen” or “Sailor”.

What I’ve discovered is that even with very tightly defined skills, players will still make situational arguments in the game to broaden out the scope of that ability. As a GM that can be frustrating—you either get one or the other, not both: broad skills that allow for flexibility or specific skills that shouldn’t have any flexibility. I’d rather user fewer meta-skills that give PC’s the room to be creative.