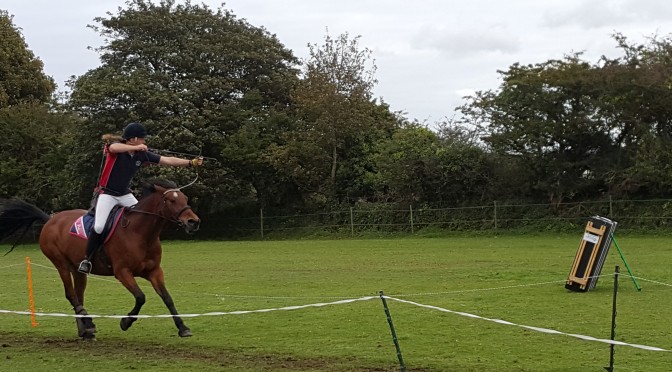 This is the sort of thing we get up to on a Sunday morning down here in deepest darkest Cornwall. When most people are reading the paper or having a late breakfast we are training the next mongolian horde. You never know when you are going to need an army of mounted archers!

It is one thing to discuss on the ICE forums whether this combat round model is realistic or not and (see the Beta 2 Arms Law discussions) it is quite another to see people who really can do these things for real. The thing is that role playing games are just that, a game. They are not realistic. If they were then characters would probably take a single hit and then roll around on the floor crying out for you not to kill them. No one is going to take a full on strike from a battle axe and then carry on adventuring for three more days!

In the same way what I was watching yesterday was not combat but sport. Yes they were drawing and firing five arrows in less than 12 seconds but they were not drawing the bow sufficiently to penitrate armour (mind you it took two people to get some of the arrows out of the wooden stands), they were not firing at dodging  and evading targets either.  On the other hand they were cantering unfamiliar* horses with no hands.

The point of this is that we get to pretend we are horsemen or women or warriors but it is actually very easy and relatively cheap to do many of these things for real (as long as you do not want to go running around killing people). You should look out for events and opportunities to give these things a try. I hope to be able to post a photo of me doing this in the new year!

*Horseback archery is carried out using a pool of horses which you are alloted by random draw. You do not get to use your own horse even if you have one. It is one of the things I like about the sport. The entry point is very low. The same is true of the Modern Pentathlon, another sport I am interested in.