This is not one of our 50in50 adventures, no, rather this is a sort of crowd sourced adventure. So if it is crowd sourced then technically I am not saying that there will be this monster at this location, no, you will suggest that monster goes there and this one here and so on. The end result should be an adventure with monsters and villains for which I am entirely not to blame.

Or so the theory goes…

So, the inspiration for this was a quote I heard on the radio today. I wasn’t paying attention so I have no idea of the original context but I thought “That sounds like one of Brian’s adventures”. I googled that title and there is a piece of fan fiction of that name and this has absolutely nothing to do with that but I have linked to it just out of courtesy as Lady of the lake came up with the title before me.

My initial thought was for a originally coastal city or large town that over the years flood defences had crumbled or drainage ditches had become choked so that the surrounding land had returned to a wet march. The city itself is approached by a raised causeway. Part way along the causeway are the remains of a gatehouse. One tower has completely collapsed into the march, the arch over the causeway has also crumbled but one tower remains mostly whole.

I am thinking that the city is inhabited primarily by the incorporeal undead, so no zombies and skeletons but more shadows, wraiths and spectres. These marshes could be home to corpse candles and corpse lanterns. For a lower level party the marshes could be haunted by phantoms, being only 2nd level. 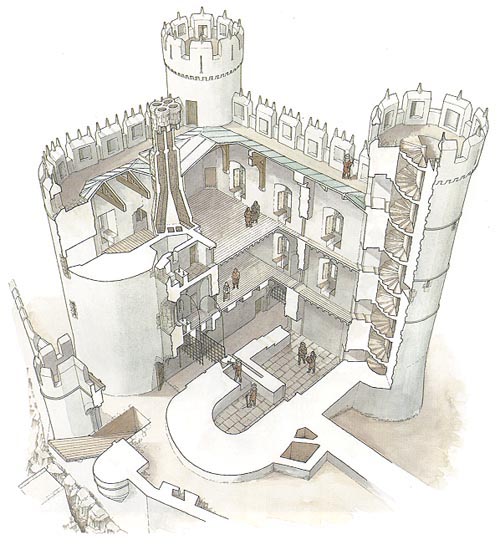 So this is a real gatehouse. If we wipe out one side due to collapse we have six remaining chambers over three levels if the party decide to approach our city along the causeway.

That is not a given of course. There are parties that will stubbornly insist on slogging though the marsh to avoid it, those that will fly over it or longdoor past it.

To address some of these I propose that the last vestige of the gate captain be a Spectre.

There are three levels of Spectre in Creature; Law Minor, Lesser and Major at 5th level, 10th and 15th respectively. These attack using Shockbolts, Lightning Bolts or more so they can control an area hundreds of feet across the road. Yet they are easily within the capabilities of even a low level party to take on.

The rest of the gatehouse guard can be Ghosts which start at just 3rd level (Minor Ghost).

So that is the first set piece encounter, can the party get past the gatehouse?

What about those pesky players that refuse point blank to go anywhere near the obvious adventure site of a gatehouse on a causeway?

I would happily let them trudge their way through the swamp. To make things interesting we can weave a bit of back story into this. Imagine this city was being defended for a reason. I can imagine a city under siege being protected by the heroes in the title when along comes an evil necromancer (That’s a stupid phrases isn’t it? How often we we have good necromancers saving the day?) and brings down the city from within. That explains the undead and why the city was left abandoned. Bound forever to defend the city are the ghostly remains of the heroes. Any party that want to try and approach the city via the marches can face random encounters with ghosts, phantoms and for those at a higher level Revenants and Shadows.

I am sure we could produce a scaling table of random encounters for parties of varying levels. If anyone tries to rest in the swamps then we can toss in an encounter with a Mara.

So what about in the city?

I don’t want to detail that in this post. Have a think about it between now and next Tuesday. I will put forward some ideas. I have an awesome idea for a BBEG at the end of it all but we also need a good reason for the party to need to journey to the city in the first place.

So your mission should you choose to accept it is this:

6 thoughts on “City of Forgotten Heroes”