In my opinion the Drow are an almost perfect villain. As they are a race you can pitch them at almost any level and you can have as many or as few of them as you like whenever you like. I found their rolemaster stats in Companion I, page 45. The problems is though that the companion does not convey even one percent of the essence of drow that make them this perfect foe.

The best way to describe it would be the decadence of Rome under Caligula crossed with the fascism of the third reich. That is isn’t far from the mark. To start with the Drow worship a spider goddess called Lloth. This puts a female drow at the head of the family, known as the Matron or Matron Mother. Only the Matron Mother is allowed to have children and any others will be sacrificed to Lloth. It is perfectly acceptable and indeed normal for the Matron Mother to sacrifice the father of her own children to Lloth after mating, taking a different partner for each child. Although if she thinks the father is a good specimen or has some other value he may be allowed to live for a while longer. 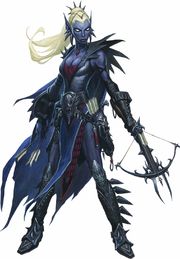 All of drow society is ruled by the matron mothers of the eight most powerful houses in council and the way to become one of those is by wiping out one of the houses above you in social ranking. If you try that and fail then it is almost certain death as the ruling eight close ranks. No one in power likes the idea of a powerul usurper trying to upset the status quo after all!

The worship of Lloth is everything to the drow. All drow females are enrolled into the church and the number of priestesses and high priestesses is a matter of pride to a house. The men are allowed to be warriors or magicians but are by far the lower class. Few live long enough to attain great power because should they be seen as a threat then the church will dispose of them. The drow maintain academies for warriors, magicians and the church and upon completion of their studies every drow is tested. Those that fail are sacrificed to Lloth although not killed, Lloth has other plans for them.

Below the matron mother’s children are the other drow not part of any recognised family. These could come from houses not wealthy enough to maintain an entire ‘noble’ household so family members are forced to work for other houses. This could be as housefld soldiers or other more refined rolls.

For drow that cannot be supported by their family or find employment in a more powerful house then to them goes the title of renegade. These are often mercenaries employed by houses as and when needed to bolster a families defences or even for an attack on another house or for  more subtle duties. to most though the very thought of the renegades is distasteful but renegades are not the bottom of society.

The drow economy runs on slaves, slave labour and limited trade with cultures that do not outwardly object to slavery. Slaves farm the mushroom groves, work the mines and build the aquaducts that bring in the water. Slaves carry messages across the city and carry out most of the other fetching and carrying for a household. The drow will happily force any intelligent race into servitude except surface dwelling elves whom they would rather kill on sight especially elvish children.

The drow carry forth an almost innate hatred for the surface dwelling races. This is taught to every drow from birth and reenforced at the academies. It was, to hear the drow telling of it, the surface races that robbed the drow of their right to inherit the surface world and forced them underground. Drow not infrequently mount surface raids by night to capture slaves although they prefer to take races that live below the surface such as orcs, goblins and bugbears. If on a raid they encounter surface elves they will do their upmost to leave no survivers. Anything that can survive living without the sun and can be beaten into submission is prime slave material in the drows’ eyes.

To human eyes what we are most likely to see are the remains of Drow fortresses left over from the last time the drow ruled parts of the surface. These are often magically raised or at least desiged and built with powerful magic in mind. They often include landing platforms for flying troops and whole levels or balconies that can only be reached by air and not from the ground or by non-flying or levitating troops. Each fortress is then connected to the underdark and to each other by passages that run underground, normally miles underground, so that each can be reenforced from other fortresses without the need to move on the surface.

Although most if not all of these fortresses are now abandoned or lost to the drow you can be assured that they are not forgotten and the loss will be avenged.

Next time I will tell you some more about drow weapons and equipment and their love of spider venom.

2 thoughts on “Drow and Drow Culture”