All this talk about channelling got me thinking. There was also a thread on the forum of someone wanting plug and play adventures.

The problem with plug and play rolemaster adventures is that no published adventure can ever know what options are in play and which aren’t. As a rule of thumb you could optional rules relating to character creation in the companions made PCs more powerful, not less. If you accept that premise then any adventure written against the core rule books would be varyingly under powered when used with characters created with optional rules, spells and skills from the companions. As an example the core RMC core rules has no option for two weapon fighting styles which in many games are extremely common. Stunned manoeuvre is another skill that can have a huge impact on the outcome of a fight.

Any adventure where the PCs had twice the attacks and could shrug off stun results would have a huge advantage over adversaries who didn’t and couldn’t.

So bearing that in mind I am not going to give you any actual stats as you will have to build the enemy to fit your game and challenge your players characters. What I want to do is suggest what to me seems at first an unusual choice of villain.

This little adventure is completely off the top of my head, untested and unplayed. You should use it for inspiration only!

At first thought Healers would not necessarily seem the natural choice for an evil mastermind or villain. I think the prejudice comes from the idea that healers do good things to people and most people don’t want to piss off their healer. If anyone was going to coerce a healer and force them to do bad things, they are more likely to bad people themselves so a vengeful healer is most likely to be still on the side of ‘good’ or at the very least an anti-hero. Or that is what I was thinking until I stopped thinking of the healer as a one dimensional, personality free cliche.

Separate the person from the profession and  there are a multitude of reasons why you can justify an evil healer. Think how many stories there are based around experimenting on people or animals or even individuals that can get a twisted pleasure from being around the suffering of others or even their own.

For this adventure idea I want to think along the lines of having a whole ‘party’ of terminators after the PCs. What made the movie Terminator so cool was his unstoppable nature. In this little adventure at the heart of it is a simple band of brigands lead by an evil healer. The brigands have become incredibly successful as they are almost impossible to put down. Their leader can just put them back together and back on their feet again.

The healer will need the healing base lists including transference but I also  suggest adding Symbolic Ways, Light’s Way and Calm Spirits.

Back when this band started out the Healer assumed control buy using Calm Spirits to completely disarm literally and figuratively the original band of brigands and an crossbow bolt to the back of the head dispatched their former leader.

The current band is made up of two warriors, a thief and a monk. The skill level of each is up to the GM and the party that wander across this place.

The band’s hideout is littered with stones inscribed with magical symbols (using Symbolic Ways) that provide the band with a number of magical effects. Some are used as traps such as stones in the floor that when stepped on cast Calm spells. I will leave the level, number and position of these to the GM as having a single character ‘Calmed’ may be a big problem to a 1st level party but a Calm III may be more of a challenge to a higher powered group. As the brigands have been here for years any and every stone that is suitable has been enchanted to give the brigands every advantage. There are stones that will heal, protect and so on. All of these are well known to the brigands and they will use them to their best advantage while keeping them a secret if they can.

The band’s ‘lair’ is an old and now abandoned mine building. The stairs in the top left lead down into the collapsed mine tunnels. The rest of the rooms were once store rooms, workshops, dormitories, kitchens and all the other supporting services for a working mine.

The GM can dress this place as they see fit.

Much of the complex is still unused. 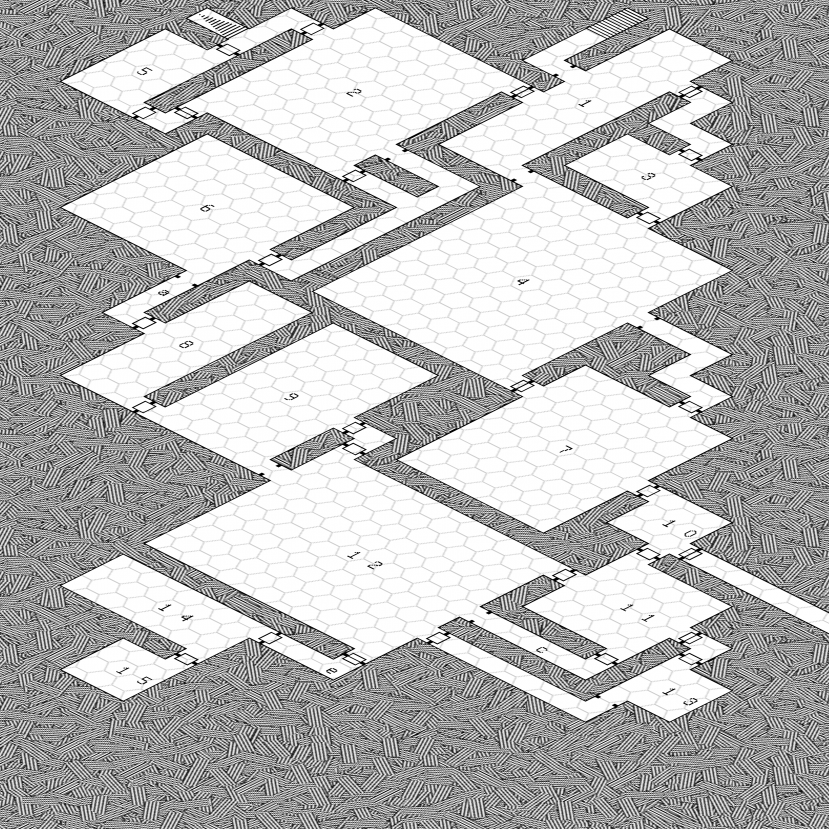 The players should meet the brigands outside of their lair. They [the brigands] will attempt to size  up the party before deciding if they are a good target or not. If they decide to rob them then they will wait until the party are a long way from the nearest town or village and then try and steal their horses in the night. If the party look too tough then if they cannot steal them then they will kill them. Once the party are stranded then the brigands will try and pick them off. They never fight to the death. They know that as long as they can get home they will be healed up and can try again. Nothing is worth getting killed for.

The brigands can and will come back night after night and grind the party down if they have to.