“Fair and Balanced” is not just a Fox News blurb, but a constantly cited principle for RPG game design. But what is balance? An arbitrary viewpoint? Neutral game mechanics? “Fairness”? Often it comes down to personal opinions and long accepted norms established long ago in D&D.

RMU development is a perfect case study in the tension between rethinking a ruleset and an unquestioning loyalty to RPG tropes. The most basic assumptions are often the most discussed: Magic Users can’t wear armor; magic is broken down into 2 or 3 realms; the balanced party (Fighter, Thief, MU, Cleric); Class tropes and the definition of a particular class, etc.

Rolemasterblog has discussed and deconstructed many of these tropes, but it always seems like the fall back argument is “balance”—without ever a real discussion of what balance means. Like most of you, I started playing D&D and AD&D—you know what? That was a broken, unbalanced system. I recall playing a higher level Cleric at a CON and just destroying everything. (Blade Barrier anyone?). It wasn’t fun, it frustrated the DM and while I got all the glory it didn’t feel earned.

Table top RPG games have too many variables to allow for true balance. Players can make unexpected choices, it’s impossible to create encounter parity and role-playing actions can usurp game mechanics. Also, the adventure or GM can emphasize other aspects that rely less upon game mechanics and more on problems solving or role-playing. The problem with “balance” is that it assumes the following paradigm: 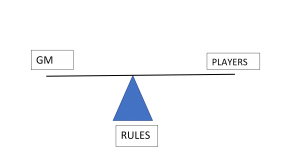 This model positions the GM on opposing end with a ruleset balancing the two. This is a false dichotomy, with the main focus on the impact of rules on the player and PC’s.

However, if chasing “balance” is a false choice, then a better mental model switches the positions of “Rules” and “GM”. 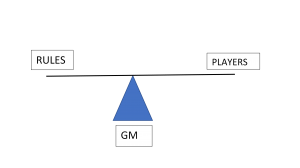 This model accepts that no open system can ever be truly “balanced” and recognizes that the GM is the final arbiter AND best able to adjust game flow to handle unpredictable outcomes, player behaviors and rule shortcomings.

I’m less concerned with a PC being able to cast spells AND wear armor, than a flexible set of rules that handle in game action resolution. Profession constraints, skill access and player roles within a group are NOT really RM/RMU game mechanics. The game mechanics are maneuver resolution, skill check resolution, spell resolution and combat resolution. Period. Whether a mage can wear armor or what skill costs should be for a Ranger is purely arbitrary or setting specific and not part of game balance.

“Balance” is the last argument of the scoundrel! So GET OFF MY LAWN!!!!