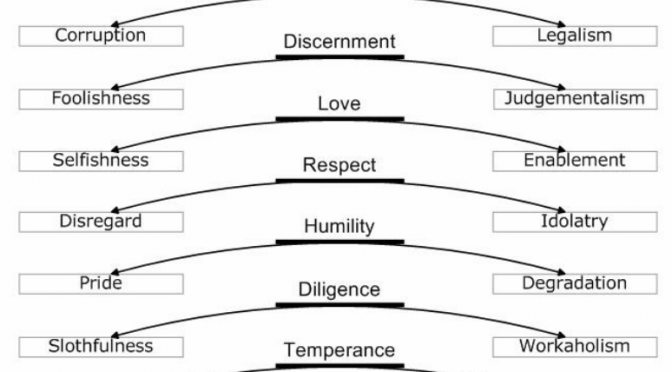 A couple of weeks ago Loraedor posted an article called The Virtue Continuum which suggested the possibility of dice rolling personalities for PCs and NPCs alike to either provide a starting point for a new character or to give a psychological profile for an NPC.

The criteria were Integrity, Discernment, Love, Respect, Humility, Diligence, Temperance and Courage and just like rolling for a stat everyone falls on a scale from minuses to plusses against each stat and their profile would then influence their choices and attitudes. I think rolling an additional eight stats is over the top for my needs but these could be grouped quite easily into three qualities (integrity+discernment), (love+respect+humility) and (diligence+temperance+courage). I wonder though whether these are actually new stats at all.

As Rolemaster aficionados we know we already have ten stats to play with and I can see a parallel between diligence, temperance and courage and the RM stat for Self Discipline. I think love, respect and humility fall under Empathy and integrity and discernment are covered by Presence. Rolemaster stats give us a bonus range of -25 to +25 or with racial modifiers that becomes -45 to +35.

I do not roll up every NPC the characters meet, most merchants, waiters and gate guards are of little consequence but if the NPC has a part to play in the story is it too much preparation to just roll these three mental stats. If as GM you are planning on having the characters have difficulty entering the city after dark would it make a difference if the sergeant at arms was a fairly charasmatic figure (very high Presence) to his men or if he was a complete slob (very low Self Discipline)? I think it would.

I have been thinking about this for a couple of weeks now. I know off the top of my head that a stat of 76+ gives a +5 bonus, 90+ gives +10 and so on. Creating a spreadsheet to give you 100 sets of three random numbers 1-100 is but a moments work. Given that you now have the stats for the next 100 people the characters interact with and combined with Loraedor’s Continuum an outline of their personality. I think this is as useful as the Character Law page full of default NPCs.

I have made my spreadsheet, or should I say I am making, and I keep making it a bit more sophisticated. It currently creates 20 random NPCs each wth a random race, rolls their stats and works out the stat bonuses and penalties including racial modifiers. It also rolls their appearance and adds their presence bonus to it and it is giving them a name. When I am finished I hop it will be able to generate any of the 20+ races from Character Law and Companion One but modified to reflect the races from Faerun (so Fair Elves become Moon Elves and so on). It will also be able to generate up to 1Million names by randomly picking parts of the name and stitching them together for each race. Right now it only has 75 names to pick from and 5 races but that is sufficient to get the thing working, everything else is just loading data and expanding ranges.

But I have digressed, the conclusion I reached from the Continuum was that rolling the three stats was worth the effort and made for a richer game that was easier to GM (easier to differentiate NPCs, easier to create personalities on the fly and easier to be consistent if the characters meet the same NPC in different game sessions).