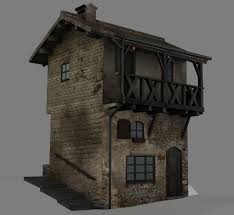 I was doing some work on the training packages we use the other day. Depending on the package, the player gets a starting kit, money, maybe a bonus item etc. Then it occurred to me that even a starting character has a good chance of being “landed” ie they own property. Thinking back over decades, I can’t ever recall giving a starting player land/building/business and can’t seem to think of a reason why not. Whenever a realization like this occurs I suspect the subtle hand of a fantasy trope guiding my thinking process. What reasons, good or bad, might have formed this mental model?

So why not allow for starting players to own land? There is a lot of options between a thatched hut on a farm plot and a multi-story tenancy in a large city—it doesn’t have to be a hovel nor a large castle or stronghold.  A GM can choose easily choose a property that fits the setting and not give a 1st lvl player an unfair “advantage” (a better benchmark than “game balance”). A few thoughts:

In the bigger scheme of things a small building in a city worth a few hundred GP’s will quickly seem like  a small value to a group that adventures for magic, gems and gold worth thousands. A starting character with leasable land or property that generates a few silver a month will quickly outgrow that need for such income. However, at the start of the game or campaign that property could provide the hook for the initial adventure, be a safe haven for a low powered group and a common foundation for the group’s identity.