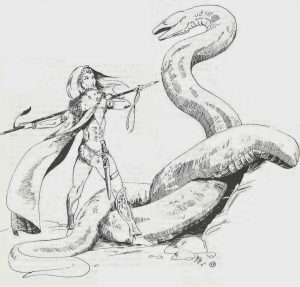 When it was first introduced in Arms Law the fluid concept of splitting a weapon skill between offense and defense was very compelling. It helped that RM’s d100 system provided a larger result range than the competing d20 systems that allowed for any number of modifiers to be used within that basic framework: multi-attack, drawing weapon, parry rules, combat modifiers etc. Mostly it was just intuitive and the allocation between offense and defense added a layer of combat strategy within a simple die roll.

However on facet of combat has been the subject of repeated rule revision and discussion: an effective initiative system. These solutions generally involve 2 components: a roll (d10, d100 etc) modified by the characters Qu. Whichever system is used, the purpose is to determine who will act or attack first—an important consideration in a system that can result in decisive criticals.

If you haven’t seen our weapon specific modifier table posted on the RM Forums I would encourage you to do so. You can find the document link here:

RM/RMU generally sets combat modifiers at fixed rates regardless of the weapon size, speed or function. For instance, drawing a weapon is generally -20 whether you are drawing a dagger or a 2H sword. Attacking multiple foes incurs the same penalty per/target no matter if you are using a pole arm or unarmed combat. It seems like a system that models weapon efficacy with individual combat charts can better model other weapon characteristics. In fact, even the earliest RM had weapon stats for “speed” and “length/reach” but never an elegant solution for incorporating them into combat without clumsy or complicated rules.

Our initiative combat hack brings the initiative system into the offense/defense duality, includes weapon specific factors, eliminates the need for a beginning declaration phase and adds a component to combat initiative beyond “order of action”. A new tactical “triumvirate” of combat! How does it work? Let’s lay out the parts:

The character rolls d100, can allocate part of their skill bonus to the roll and then adds weapon speed mod and Qu mod. It’s important to note that these are in order of importance—Qu will often be the least important modifier. The concept, like the allocation between offense and defense, means that the character can opt for a quick strike or offensive series over accuracy or even defense:  a “wild, rushed, flurry of attacks”. Obviously the character can opt to allocate none of their OB to Init.—like parrying, this adds a tactical layer to the combat without any “one-off” rules. Weapon Speeds can range from 0 to 75 and thus are the larger part of the initiative roll when historically Qu has been the predominant modifier. This adds complexity to player weapon selection beyond its ability to deal damage.

Initiative Results: Normally initiative is used only to determine order of attack/action. Under these rules the winner of initiative also sets the “combat sphere”: the area/range that is most effective for their weapon. For opponents using the same/similar weapons this won’t matter, but for weapons with different combat ranges this can have a significant impact. So while the initiative roll uses “weapon speed”, the combat sphere uses “weapon range”. As a simple example visualize two combatants; one has a halberd and the other a dagger. The halberd has a slow weapon speed and the dagger has a high weapon speed. They roll initiative and the halberd user opts to allocate a portion of their OB to the Init. roll knowing that the dagger wielding opponent will have a speed advantage.

Combat Sphere: The winner of the Init., sets the “Combat Sphere”: the effective melee distance based on the weapon reach. Basically there are 4 broad melee ranges: Hand (1-2’ unarmed, dagger etc), Short (2-4’ handaxe, short sword etc), Med. (5-7’broadsword, longsword, battle axe) or Long (8’ whip, polearm, 2H). Alternatively, you can use the Weapon Combat Modifier chart linked above and use the proximity penalties. A penalty of -20 per range category is applied to the combatant who loses the Init. Returning to the “Halberd” and the “Dagger” combatants: Halberd wins the Init and decides to attack with his full OB. Halberd is positioned for the attack at the optimal reach of the Halberd. Because Dagger lost Init. he is outside the effective range of the dagger and is at -60 (Hand to Long range -20×3). Dagger can allocate remaining OB (been reduced by 60) to parry. If Dagger doesn’t have any OB remaining he can’t allocate to parry but is allowed to attack modified by the negative OB.

Note that if the Init. results were reversed, Dagger would have moved in close to Halberd, effectively nullifying the long weapons attack advantages. In this case if Halberd survives the attack he could elect to drop the Halberd and draw a dagger, but OB would be furthered reduced by the weapon draw penalty on the Weapon Combat Modifier chart.

Summary: Adding the “combat sphere” not only simulates weapon reach in combat but it increases the importance of Initiative beyond determining first strike. Including Initiative into the skill bonus allocation (with OB/DB) reinforces the importance of Initiative and builds in individual weapon speed. This process is easily inserted into version RM combat, adds strategic choices for the players without new “one-off” rules, models weapon advantages and disadvantages on more than just damage, simulates the factors between combatants with widely varying weapons/reach and adds a “visual” aspect to melee with combatant positioning.

22 thoughts on “Initiative, the third leg of the RM combat stool.”