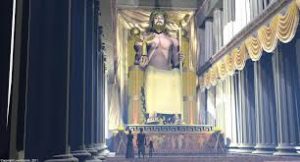 Von l’edor, First Secretary to the High Scion hastily adjusted his robes and consulted his schedule book once again. This meeting was highly unusual; unscheduled with no information provided to his office. He hoped his last-minute apologies to the Delgaran Trade Delegation would suffice; the Laan merchants were generally insufferable and easy to offend. He made a notation to provide them with a cask of Vermillion House Red—a rare vintage that should appease their egos.

The door to the inner Sanctum open and close with a resounding boom. His master, the Elder Scion of Kuor swept into the hall, followed by two harried looking seers or scholars. The Scion was wearing his most formal attire, robes of gold thread hemmed in black and he carried his Sceptre.

Curious, he thought, perhaps this will be a religious meeting…

Upon closer inspection, the two scholars seemed more noteworthy. Their robes were functional but well-made of fine cloth, sewn with mystical or astronomical symbols.

Probably another obscure sect or cult with more apocalyptic visions—they seemed to be showing up with more frequency.

Despite their subtle finery, they both looked drawn and dusty from travels. He sniffed, hoping they would detect his disapproval of their appearance in such a holy sanctuary.

The Elder Scion settled into his chair, the black wood gleaming from hours of polish, but his presence was dwarfed by the towering statue of Kuor that dominated the background, overlooking the pillared hall. The High Temple was the grandest building in Eidolon and the center of power for the Lords of Orhan in Kulthea–despite what the Elves in Palia argued he thought. Von looked to his Master for some direction or clue to this meeting, but the Elder Scion seemed focused on the far end of the hall. Finally, he motioned for the scholars to take their place on the lower audience platform.

At the far end of the hall, the burnished doors swung open slowly and a small group assembled for introduction. Even from the distance, Von could hear Scion Oberon clear his throat nervously.

“Elder Lord, may I present Knight-Captain Gorge Kroger, Commander of the Sun Guard and First Protector of the Light Bringers of Phaon.” The tall soldier strode forward, resplendent in his gold and red enameled armor. Kroger was a regular visitor to the High Temple but the unexpected nature of the audience implied a military matter. The Knight-Captain stopped at the foot of the stairs to the Holy Dais and removed his helm. His blond hair spilled out over his shoulders and he bowed his head respectfully to the Elder Scion but was otherwise silent.

Oberon spoke again, “Elder Lord” may I present Chomen Drah, High Builder of Iorak”. My breath caught, and my writing faltered slightly. The Builder-Priests were rarely seen at the Temple and having a High Builder was even more unusual. Like all the Priests of Iorak, Chomen was wearing simple gray tunic and pants, a worn leather tool belt around his waist. Short and squat, he radiated strength and purpose and seemed to study the stone work of the High Temple as he approached the Dais. He stopped. “Elder Scion, I have come as summonsed.” He intoned in a deep baritone voice. A serious man, indeed. Von thought.

Oberon called out again. “Elder Lord” may I present Malim Pelax, of the Order of Loremasters.”

A Loremaster, a Knight of Phaon and a Builder of Iorak? Auspicious company indeed. Von peered down the hall. Who else is present for this meeting? He had met Malim before—a pompous ass to be sure, but supposedly a powerful Mage. He strode down the hall confidently and stopped between the Knight and the Priest.

“High Priest, this summons is highly unusual and inopportune. The Loremasters and Clergy of Orhan work as equals, not as master and servant. I would have you know I was involved in consequential matters to the south. Do the whims of the Priesthood outweigh the work to counter the forces of the Unlife? I demand an explanation!” Malim exclaimed loudly.

The High Scion contemplated the Loremaster as if considering his words. Calmly but forcefully he spoke. “Loremaster, your presence was ordered by the Council at my request. Answers will be forthcoming shortly, but do not presume to question me.” The Scion’s voice had slowly risen as he spoke, with just a hint of anger underneath. “While the Loremasters and followers of Orhan work together, make no mistake as to primacy. Kuor rules all above AND below and your services and loyalty or required.” At the last, the High Scion sat forward in his chair holding the Sceptre before him. With his words, the air had grown heavy, and the very walls of the Temple seems to bend inwards and groan from a great weight or pressure. My pen dropped from my hand and my knees buckled. The High Scion was barely invoking the Wrath of Kuor but those present could feel the force of will. My eyes cleared and I noted that both the Knight Commander and Loremaster had fallen to one knee, but the Builder-Priest still stood straight and was examining the High Scion’s Sceptre with open curiosity.

“Enough”, the High Scion said, and the pressure disappeared. “We don’t have time for foolishness. Malim, your reservations are noted but irrelevant. Oberon, announce our last two guests.”

Oberon’s voice squeeked once and then settled. “High Priest, may I present Sumendar of the Guides of Vurn-Kye and Jan Jo’drin..” Oberons voice faltered once again but he continued “…Changramai Warrior of the Tenth Veil”.

Both figures walked forward, a contrast in style and appearance. The Navigator, while dignified in his black uniform was pudgy and older and he moved with a bow-legged gait. The Changramai…glided…his movements precise and economical, conveying a coiled deadliness. He wore plain white robes with a gold collar signifying his rank. Tenth Veil! Von thought. Changramai of that skill were only rumored or heard about in legends!

Malim, perhaps exercising caution after Malim’s rebuke, bowed deeply to the High Scion. The Changramai matched Malim’s bow and added a fist to the heart in the traditional Changramai salute. All five abreast, waited for the High Priest to begin.

The High Scion inspected each figure below and then nodded to himself. He stood and indicated the Scholars that stood quietly to the side.

“These are the Seers of Strok. They have a crisis and they’ll need your help.”