On Sunday I found myself with an hour and a half to kill but also tied to the house so I decided to watch Conan The Barbarian on Netflix. My first impression of the first five minutes was that they had the the depiction of the Pictish warriors/savages down perfectly. At that point things looked promising. Pictish Warriors from the movie… 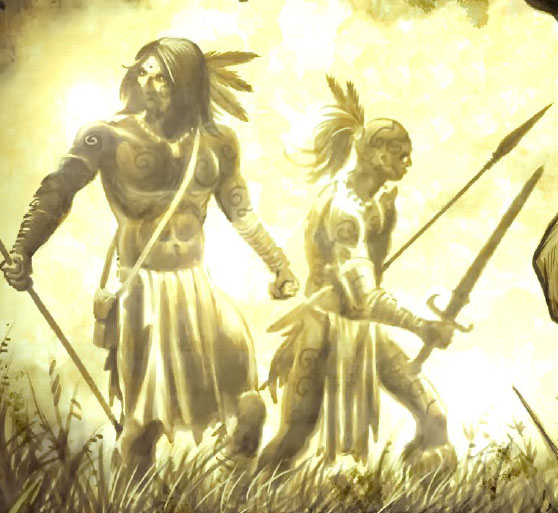 Pictish Warriors, they all seem to share a sort of brutal Native American vibe.

After that my opinion changed somewhat. To be honest I think this is a pretty dreadful movie and I read this evening that it cost $90M to make and grossed $21M, making a net loss of $69M. I am guessing most of that went on the CGI which was certainly plentiful and was mostly used in place of any real plot and dialogue. I admit that you don’t engage with Conan for his witty repartee.

So even when watching the movie it was plainly obvious that this was a dreadful film and no amount of topless slave girls and serving wenches was going to save it. Surely this was obvious to the creators at the time?

What the film tried to depict was what we would consider an entire adventure, not a full campaign but certainly more than just a collection of encounters. There was a definite character motivation, revenging Conan’s father’s death, that ran through the film but the fact that Conan was plainly not doing anything to further that revenge until a huge clue lands in his lap says that if this were a game and not a movie then the film represents a character goal inserted into a greater campaign.

We do get a few encounters along the way. Conan and crew attack a slave caravan. Their plan involves starting an avalanche of rocks down on to the slavers caravan and then charging in and killing the remaining slavers. Being Hollywood all those rocks only hit slavers, no innocent slaves were hurt. You try that in one of my games and there being 20 or so slaves for every slaver there is a very good chance that you will be scraping Slave jam off the road.

Another encounter has some bad guys row up to Conan’s ship and attack them. Conan’s crew then defeat them and stand around on deck cheering. No one thought to wonder where the attackers had come from. Maybe if Conan had asked a few more questions he would have exacted his revenge a few years earlier?

So was there anything good about this movie?

Yes, right near the end the hero and NPC thief (for want of a better phrase) do battle with a submarine beasty. We never really see it, just a mass of kraken-like tentacles. The fight is a bit so-so and the CGI a bit mediocre but the set for the scene, and the beast itself was really evocative of the Cthulhu style dark gods of the Robert E. Howard’s Hyboria (Howard and HP Lovecraft were close friends).

So what I think distinguished the best from the worst in this movie what that all the early encounters were disconnected and there was no visible plot thread to bring them together. Leading up to the water beasty scene we got to see Conan recruiting his thief NPC, breaking into the BBEG’s fortress and then encountering the beast and its ‘keeper’. We were suddenly into a story that was progressing from challenge to challenge and had a continuity.

I suspect that writing a good movie is slightly harder than writing a plot for a gaming campaign or at least a enough plot for a few gaming sessions but if we put the player in the seat of the viewer, unless there is a reason and a feeling of progress then games would be just a procession of meaningless encounters. We are almost back to wandering monsters, that is how the first half of the movie felt.

So how could the movie been made better? Well you could have lost the first half of the film and started with the recruiting the party to attack the fortress. Conan could have explained the entire plot up to that point in about 5 seconds “Fifteen years ago this man killed my father, I will have my revenge! Who is with me?” <kick over tavern table and shake sword>

We could then have launched into the one bit of the movie they made well. After the kraken scene they tried a bit too hard to be Indiana Jones and the movie slumps back into the mire.

For GMs, if you have ever watched his movie, or any like it, the lesson must be to draw a compelling world for your players. Not for the characters, but the players. If they are not invested in it then the best plot in the world will become just a linear series of hack and slash encounters. I think this is same idea that Brian has been pushing for for RMU. It has to have that compelling world, Shadow World, to get people to invest their heart and soul into wanting to bring the game, world and story alive for their players.

I know there is an argument that not everyone wants to play in Shadow World but casting RMU as the Shadow World rules does not exclude anyone. I don’t adventure in Grayhawk but I reuse old style D&D modules. Most people do not adventure in Faerun but they will happily use 5e stuff. GMs tinker with bought materials, they reuse and they extend them. They always have and they always will. I have put RM characters, adventuring in the Dales through Traveller adventures. I just replaced spaceships with wagons. After all a good adventure is a good adventure regardless of any fancy dressing up but for my players the clothes I put on that adventure helped bring their little corner of the Forgotten Realms to life.