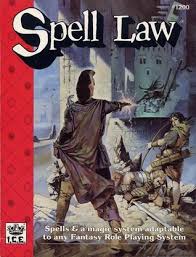 I thought I would stir things up a bit and do a quick blog on what I consider the most problematic spell lists found in the early version of Spell Law. I’m going to refer back to Spell Law #1200 which is the punched up version of Spell Law from RM2. Now that I am fiddling with a 4th iteration of BASiL I had a chance to review my original notes and comments.

Obviously this is just  my opinion and I’m not suggesting that these lists have merit–I’m sure I could make a counter-argument on the utility of these spell lists as well. However, in the process of re-writing spell lists, I found spells and many lists that were marginal, needed quite a bit of re-jiggering or some just beyond salvaging. In fact, I found real issues with virtually EVERY spell list in Spell Law! What started as a rewrite of just a few problematic ones turned into BASiL–a full renovation of the spell lists. So while I can point out issues in every list, here are my top 5 problematic lists:

At first glance, this list would seem to have quite a bit of utility and be an automatic for Druids and Rangers. On closer inspection though, there just aren’t that many useful spells here–and there are only 16 spells to begin with! First off, the first quasi useful spell doesn’t occur until 7th level: Breeze Call. The 1st spell is about as bad as the famed “Boil Water”: “Living Gauge” allows the caster to know the EXACT TEMPERATURE of the surrounding atmosphere!!!! The next three spells are various predictions: rain, storm and weather. The problem of course, is that the GM will need to decide what the weather will be over the next 24 hours in order for these spells to have any real value. So it probably becomes a self-fulfilling function where the GM has to set the future weather to provide a spell result.  Plus, do you need to break down the difference in predicting rain, storms and weather via individual spells? Can’t you just have “Predict Weather”? So once you simplify the various prediction spells you are left with 7 spells: Fog Call, Precip Call, Wind Mastery, Clear Skies, Rain Call, Storm Call and Weather Mastery. 3 of those are 20th+ level so won’t be used in 80% of play. You can see my solution HERE. (needs a RM Forum user name).

I always thought the Astrologer profession was very cool–certainly different than any other classic fantasy profession that I had encountered back then. Of course one problem is that it implies a specific setting or magic mechanic around “star power”, but that’s easy to ignore.  The Astrologer spell lists Way of the Voice and Far Voice are so similar in concept that they are just begging to either be consolidated or further differentiated. The most obvious issue is Mind Speech and Mind Voice. Mind Speech allows the caster to broadcast thoughts while Mind Voice allows the caster to mentally speak with a being. Mind Speech allows broadcasting to all within the radius and Mind Voice is only 1 target.  Mind Voice is 2nd level and Mind Speech is 7th lvl.  Mind Voice basically does the same thing as Mind Speech plus has the added ability of 2 way communication. Given it’s name, the list “Way of the Voice” should actually focus on “Voice” spells and yet there are only 4 spells that do: speech, suggestion, voice of command and word of command. The rest are all “mind” spells. “Far Voice” is almost all Mind Voice spells except for one outlier: 20th lvl “Lord Voice” that allows the caster’s voice to be heard up to 100’/lvl away. So I would move that spell to Way of the Voice, and port over the Mind Speech spells. Overall, there is at least one good spell list or two  distinct ones.

I don’t even know where to start with this spell list. Like Alchemist spells, this list doesn’t add a lot of utility in actual game play; it’s more suited for downtime or just reinforcing the profession’s premise. But then the actual spells are confusing or utterly useless. Let’s look at the 2nd lvl spell Speed Growth. It increases the speed of growth for 1 species of plant within radius by 10x. So it speeds up growth 10 days in a 1 day period. Then 2 lvls later the growth rate is 100x! That makes more sense, but under what conditions is this even useful? Herbs? Are GM’s populating healing herb seedlings for added realism? Then we have Plant Growth: the spell doubles the size of any 1 plant. It requires 1 day of growth…but…then states that the plant when fully mature will be double its normal size. So does this mean that it will eventually grow to twice it’s size, or it grows to be twice it’s size in a single day? So it’s speed growth AND size growth? Or, if the plant is already mature it doubles in size in 1 day? It’s very confusing and while cool to grow trees to 10x their normal size, if it takes a normal growth period then it loses quite a bit of in game efficacy.  Solution: complete rewrite!!!

This could be a great spell list, but as is, it’s poorly executed. There are 3 spells on this list: Spell Hold, Spell Bending and Reverse Spell. All are great concepts and mostly work, but there is some confusion as well. Spell Hold will delay a spell for X rounds and the target spell gets an RR. Simple enough? Then there is this odd “movement” rule built in that says that if the target caster moves more than 20′ (that’s pretty random) then the delayed spell will instead target a random person within 10′ of the target caster. This needlessly complicates the spell. Spell Bending is also more complicated than it needs to be. Basically the caster can deflect a Elemental spell from it’s target, modifying it by -10/10% failure. I’m assuming the target spell makes the RR and not the caster? It says the spell is deflected up to 10′ but I’m not sure why that’s important–the important mechanic is the penalty incurred  to the attack. It’s an instantaneous spell, but it’s not clear how a caster would react that quickly after SEEING a elemental attack cast. Would they have time? Would they need to be waiting/Opportunity action? I’m not sure I like the RR mechanic here. Why not treat it like Bladeturn or Deflection and just apply a fixed penalty that increases with the spell level? Finally we have Reverse Spells. The attack spell makes an RR or is reversed to it’s caster. That’s simple, but it’s still a instantaneous spell and would require the caster to anticipate or see the spell coming. I think all of these spells work better with a duration to avoid that reaction mechanic. One last thought it to merge these three spells into the Dispelling Ways list (which could be trimmed as well) to make a single cool “counter spell/magic” list.

#1 Spell Enhancement. Essence Closed. Problem: Too powerful and not necessary.

12 spells. Out of a possible 23. Not a lot of bang for your buck, so what do you actually get? An ill conceived list that breaks the whole spell mechanic. Basically there are only 3 spells on this list: Extension, which increases spell duration, Ranging which increases it’s range and the 50th lvl Permanent spell that’s completely insane since there is NO level limit on the spell that can be made permanent! Ignoring that bit of crazy, let’s look at the first two. The caster casts this spell first and then it affects another spell that is cast in the next 3 rounds (allowing for Class III casting times I’m assuming). It’s a spell that improves another spell. But how? Spell scaling via PP expenditure is much simpler and makes more sense. Let’s look at Firebolt. The 6th lvl has a range of 100′ and the next one at 11th lvl has a range of 300′. So 5 PP’s to get a +200′ increase. In Spell Enhancement, the Ranging +200 is a 15th lvl spell!!! Ouch! Not a lot of value in the Ranging spells, but how about the Extensions. x2 Duration in only a 3rd level spell! That is a crazy good deal for any spell 4th lvl or higher and only get’s better as the spell level increases. Why cast a 20th lvl spell twice in a row for 40 PP’s when you can cast Extension II and the spell for 23 PP’s and get the same duration. This is broken. Spell Law already establishes a clear linear progression of ranges and duration in it’s spells in almost every spell list. This breaks that concept, it’s unnecessary and isn’t even a good value in terms of the # of spells and the cost of using them. Solution: get rid of the list.

So what are your thoughts? Are there any lists that you find problematic? Has RMU solved many of the Spell Law problems? Is there a spell list you like or dislike? Let’s debate!!!