I have been working on one little part of Aiorskoru. I thought I would share what I have so far.

These coastal villages are many in number and are strung out along the coast, mostly near coves or river estuaries that offer safe landing for fishing boats. Each village supports only 100 to 200 people most of whom are subsistence farmers, sheep herders and coastal fishermen.

These settlements are frequently threatened by Hill Giant family groups (one male with a harem of females or lone wandering males) This gives the villages a reason to cooperate and work together.

The village of Melos is one of the most substantial and successful because of their relationship with the Morimanus. The Morimanus guide fishermen to the exact location of the fish shoals and have a greater understanding of off shore weather. In return the Morimanus young are not endangered by fishing nets and the morimanus kelp beds are not damaged by dragging anchors.

Melos is the largest village in a chain that follow a coastal path around a peninsular. With a population of nearly 800 it is considered by many to be a town or even the regional capital. Immediately off shore from Melos is a Morimanus (Merfolk) settlement and surrounding that a submerged petrified forest. The existence of the submerged forest is well know and can be seen by fishermen below the surface at particularly low tides. This forest has lead to a local legend that the Morimanus and the people of Melos are distantly related and that the land inhabited by the Morimanus sank below the waves. Those that did not flee the catastrophe were blessed with fishes tails so they could continue to farm their old lands.

The people of Melos and the surrounding villages worship the elements and those of Air and Water above all. These two elements constantly war over the village and command respect. The town of Melos is home to two priests of power, one for each element. The Priest of Air [Allair Trewaint] preaches that it is the air that breaths life into every one of us and can revive a drowned man, it can whip a sinner off a cliff top just as easily as it can rip up trees and smash down buildings, cut a man off from the air and he dies. It is the air that allows birds to stay aloft and can power ships across the sea. The Priest of Water [Howe Gothnan] says that tears are the water of life that accompany our moments of greatest joy and sadness, water is so powerful it can smash cliffs of stone into pebbles and sand, without water the blood that runs through us and gives us life is just a blackened scab. Just as water flows from trickle to stream, to river and then into the great unknown oceans so a man’s live flows from birth, through his days until death and that is the greatest unknown ocean of all. These two priests have a lively relationship that goes from good natured banter to late night beer fuelled table thumping arguments over which element is the greater. The people of Melos are as likely to pray for rain when the crops need water as they are to prey for calming seas when their men folk are caught in a storm. The religious feast days are generally celebrated and involve kite flying and singing on the beaches. These beach choirs are often accompanied by Morimanus who come into the shallows to listen and join in.

Not everyone lives off the sea. Many farmers breed sheep and inhabit the landward interior of the peninsular. These support spinners, weavers, leather workers as well as craftsmen that work horn. Other farmers grow turnips, sugar beet and cabbages over the winter and barley during the summer. Apples are another popular crop and most farms have an orchard with some farms making it their main crop and cider production their industry.

Despite the apple orchards the peninsular does not have a great deal of wooded land. Because of this most buildings are built from dry stone walls and topped with turf. Their floors are below ground level, construction starts by digging out the rooms until they find bed rock and only then are walls built up just enough to give sufficient head room. Most floors are three to four feet below ground level. The walls are made up of a great many layers of thin slate stones collected from the foot of the cliffs. They are normally two to three feet thick with very few windows, if any. 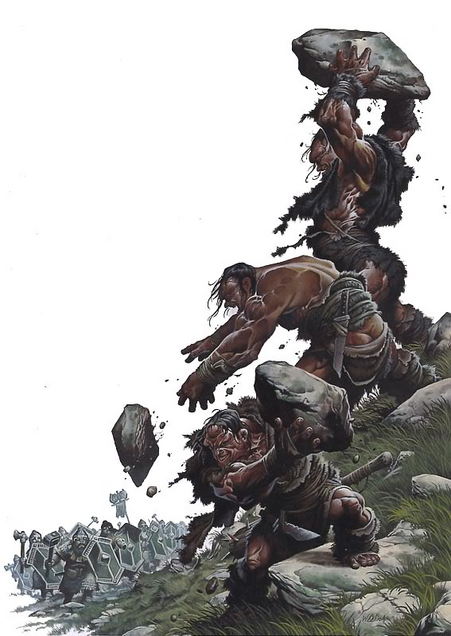 The people living on this peninsular are constantly threatened by Hill Giants. Hill Giant family groups are fairly static, they inhabit one region until they have consumed all the easy game and then move on. These families comprise a single adult male, several females and their children. When a male child reaches maturity it will be driven out of the family by the male leader.

Often gangs of males will form for short periods and these are marked by the amount of infighting that goes on as they attempt to establish a pecking order of dominance and once a dominant male has emerged attempts to usurp that position by dominated members.
When a gang encounters a family it can get violent as the dominant gang male will often challenge the family leader to a duel for supremacy. If in the duel both combatants are seriously wounded then what normally happens is that the gang members will attempt to carry off females and their young to form their own new families. If the gang leader is victorious and has the strength left over then he can and will become the dominant male and will drive off his former gang members.

Duels often start with hurling stones at each other until the two get close enough to start hand to hand fighting. Stone hurling skill is greatly prized amongst giants.

A giant family moving into an area near a village can destroy the village. The giants will eat livestock and once they are gone, start eating people. If a giant is spotted or even suspected then a militia is raised to try and drive off the giant(s). Militia membership is voluntary but to decline the call to arms is considered very bad form or even cowardice unless there is good reason to do so. Driving off giants does not always involve killing them. In a tale that is told on many cold nights one village was beset by two giant families at the same time. They could not fight them off so they started leaving barrels of beer and cider out in fields where the giants were known to scavenge. Each night a new barrel of beer was left out but moved slightly, from top of a field to the bottom, from one side of a hedge to the next field. Each night for a week the giants were treated to free drink until at the end of the week each family spied a great stack of barrels and another giant family about to steal it all away from them. Another giant was tempted into chasing a wagon loaded with barrels of cider. The villages took shifts in hauling the wagon as fast as they could to stay ahead of the giant until they crested the last rise and the horizon was the straight line of the cliff top. At that point the wagon was left to roll under its own momentum and both wagon and giant crashed over the cliff edge to be smashed on the rocks below.