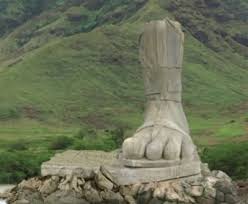 I found this shot, from the TV show Lost to be evocative. Perhaps more so because it’s just a remnant of a much larger construct. The mind fills in the blanks–envisioning the size and appearance of the “original” construct. There is something awe inspiring in monumental architecture and sculpture and it’s often featured in fantasy illustrations and images.  I’m reminded of this powerful shot from Jackson’s Fellowship of the Rings. 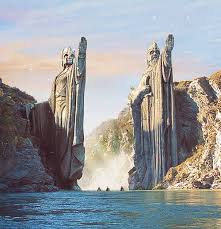 But massive statues are not just found in the realm of fantasy.  Our own world is scattered with ancient and contemporary works of similar magnitude. A few of my favorites:

Like the foot from LOST, this is The Hand of Hercules, the remnant of what is believed to be a massive statue. The only other part found is from the elbow, but based on the size of these parts the statue would have been 13m in height (43′)–making it one of the largest known marble sculptures. 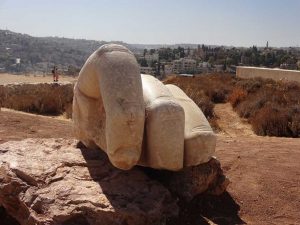 One of the great wonders of the ancient world was the Colossus of Rhodes. Few believe that the statue actually straddled the entrance to the harbor, but it was huge and real–the pieces of the statue were recorded by later travelers. 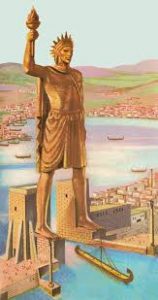 Other famous statues are the Colossi of Memmon. Each is almost 18m (60′).

Did you know that many of the maoi statues on Easter Island only have their heads exposed? The bulk of these statures are buried under ground. (an interesting note is that they have the “hand/navel” found found on other ancient statues throughout the world and cultures) 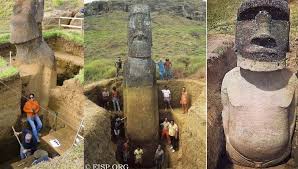 For modern sculptures few can beat the towering “Motherland Calls“.  At 285′ it’s almost twice the height of the statue of liberty. 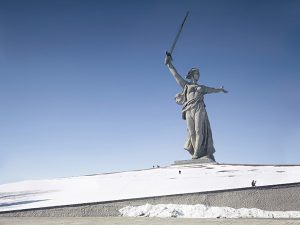 How about Genghis Khan in Mongolia! 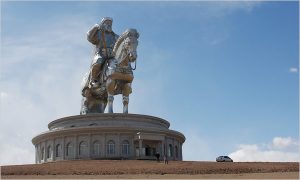 Finally, one of my favorite. Unfortunately, this one was apparently destroyed by rebels and might have been a contemporary construction. But still cool. 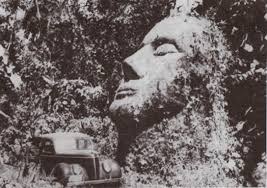 Megalthic architecture, massive statues and awe inspiring structures can add flavor to your RPG game–but you don’t have delve into a fantasy realm to find them!