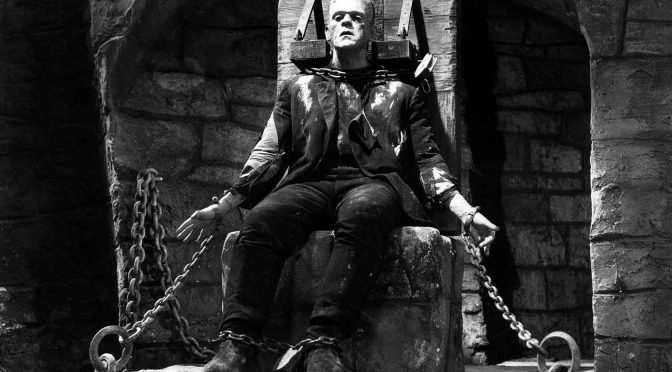 That sounds like a terrible B movie but right now I am preparing to spend a lot of time on Nagademon, or more correctly NaGaDeMon, and having never heard the words Franken Game until recently I have found myself using it twice this week.

What is a Franken Game?

A Franken Game is a game put together our of parts of other games. Originally Character Law was a bolt on replacement for must of the Players Handbook, Arms Law was a replacement combat system and Spell Law a drop in magic system. If you decided to take HARPs scalar spells and dropped it into RMC then you are now playing a Franken Game.

I once took the vehicle rules from Car Wars and converted them to d100 and used them as part of Spacemaster. It makes a lot of sense. How big a part of Spacemanster are 21st century cars trucks and motocycles going to be? The answer is tiny so the developers could not justify spending hundreds of hours perfecting rules for them. How big a part of Car Wars are cars, trucks and moticycles? Probably 95% I would say so dropping Car Wars into Spacemaster boosted that aspect of the game in an area I needed for the campaign I wanted to play.

The best rules for insanity has to come from Call of Cthulhu, so why reinvent the wheel? Just make the minor changes needed to make it look and feel like Rolemaster (think of that as the surgical stitching) and there you go. you have sown together your own Franken Game. Most of us have shelves of games you have played int he past but are not playing now. All these games have elements we really liked when we played them and bits that we didn’t necessarily like. Using them as a library of body parts allows us to customise our own games to fit the worlds we want to play in. It is also great fun and as long as you don’t break the rules too much in doing the conversion to d100 OE (open ended) then the original games play testing should safe guard your Franken Games balance.

I mentioned this in my last post. National Game Design Month. It is the NaNoWriMo of the gaming world. Let me digress for a moment.

There is an old joke about a school caretaker bemoaning the throw away culture of today and how they don’t make things like they used to where you could repair things rather than just throw it away and buy a new one. Take this broom for example, they don’t make brooms like this any more… Its had 5 new handles and 7 new heads but it is still going strong!

If you had a game you loved but you thought you could swap out the combat system for something ‘better’* and then you think “hey I like these scalar spells!” so you swap out the magic system. After a while you think there has to be a better way to handle all this profession bloat and skill bloat. So if you replace character law, arms law and spell law are you still playing Rolemaster?

I think the answer is yes you are. If you have magic structured into realms and roles are open ended and combat is driven by criticals, these are the hallmarks of the rolemaster system.

On the other hand what if like the broom with the 5 new handles and 7 new heads, there is nothing left of the original system? I think at that point you have crossed the line from Franken Game to a completely new system. If you then make sure it all works together and covers all the bases then you have a new game on your hands.

Most GMs feel we could write our own game

Most of us [GMs] feel we could write our own game. Equally most of us never will. This is where the Nagademon comes in. It focuses the mind into a single month of effort to actully write up all those ideas you have about how to create a perfect roleplaying game and get them down into a document. One month to break the back of the project. You can take as long as you like with the editing afterwards and that sort of thing. you could even go one step further and put your game on RPGNow or Drivethru. Afterall what have you got to lose?

*better is in inverted commas as your better and my better could be completely different!

One thought on “The Neological Naga Demon and the Franken Game”