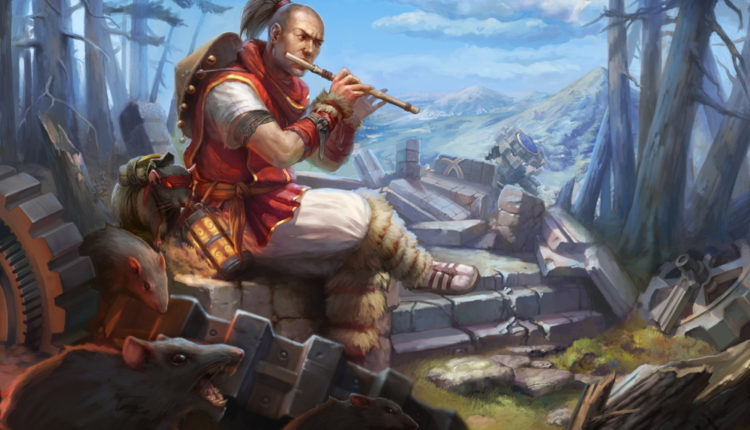 The game I am a player in at the moment has a Bard in the party. There are three important facts about this party/game that you should know. The first is that we are still what the GM calls low level, the party is 4th to 7th level. The GM is using accelerated leveling so we seem to be jumping a level or two for every about 10hrs of play. The second thing is that this is a very high magic world. Even peasants in the fields can cast cantrips and almost every family has a caster that knows at least one list and the first level spell. Finally, there seems to be a lot of role confusion in the party.

I will deal with the role confusion firstly.

The party is made up of a Magician who dresses like a barbarian, kilt and claymore, the whole chebang. That is how we met him and at first level our OB/DB combinations were so low that he could easily have been a real warrior/barbarian. The player is one of those that bought a rank in his claymore at 0th or maybe 1st level and has not touched the skill since. The player is one of those that has to grab every possible magic item for themselves. Much to other party members displeasure, he is hoarding a magical ring and sword that give a total OB bonus of +50. His total OB is probably +60 now. I think he is 5th level and has ~30PP.

We have a Noble Warrior. Also about 5th level, chainmail hauberk, sword and shield or a big old two-handed mace. He really, really wanted that sword and ring! I haven’t seen much magic from this character beyond the occasional Shield spell.

Me, my character is a 7th level lay healer. I am learning plate armour (AT17), I wield a spear, with shield most of the time. I have an OB of +48 (two-handed) or +28 one-handed. I am capable at Adrenal moves strength and speed with total bonuses of about +50 in each. I have more powerpoints than you can shake a stick at from background options and a multiplier.

The Bard. Our bard is wearing chain 13, uses a sword and is growing into his magic. I believe he has only just hit 4th level. He is lagging behind because he missed a couple of game sessions and was NPCd by the GM and picked up less exp during those sessions.

The role confusion comes from the magician looking like a barbarian, having the highest OB and only magical weapon in the party but being fight shy. The character talks the talk but when it comes to the action he wants to be as far away from the nasty monsters as possible. In our last fight against a particularly nasty and bigger than normal wyvern we wall charged in to save the innocent bystander but at the last minute the magician used Leaping to jump out of the combat and back out of danger.

The bard in this battle tried Calm Song but without success. He then spent a couple of rounds after the battle had started to get behind the Wyvern during which time he had both Shield and Blur) Attack Avoidance and either Cloaking or Brilliance lists. He then entered melee using position and magic to aid him.

Our bard seems to have just enough DPs to be able to pick up both some of his base lists and a couple of Open Mentalism lists. What he is lacking is anything overtly offensive. As a character, he was fully engaged in the combat.

Out of combat, he does have a lot of options and is one of the most useful characters. We are on a long ol’ quest and city hopping with long journeys in between. The noble warrior just seems to see the cities as R&R locations. The mage is turning into a pretty one-dimensional artillery piece. It is in these city sessions that the bard shines as our major source of information and of reputation.

From the players point of view his main complaint about the profession is that he feels inactive a lot of the time as he has to keep playing/concentrating to maintain his spell effects. He described it as prep, prep fail, prep, prep succeed, do nothing. It doesn’t help that he is the lowest level party member. I already have some spells I can snap off in a single round as I am now 7th level. I also get subconscious spells so even when stunned I am still doing stuff. I can un-stun myself, I can clot wounds and I can heal.

The player is mitigating this by buying up more non-bard lists to give himself more options. The Bardic lists that he has don’t get particularly useful until 5th level, when the effects start to last after the song ends. I would have said that all of the bardic lists ramp up from this point onwards. The open mentalism lists, in contrast, are giving him utility, more instant cast spells and a least a few subconscious spells. I can see why he may be seeing them as more immediately useful.

I think this is a shame. The character is from a supposedly affluent background, attended the best musical colleges so the backstreet thief style bard does not really suit. Combat boosts are not particularly fitting either.

If I was going to give the character a boost I would possibly consider something along the lines of reading people and body language. An Anticipations List based upon being able to see the person you are trying to anticipate the actions of. This could have combat and social uses. It would fit in with the social element of the bard and also with their mentalism realm. A first-level spell that gave a small boost to either OB or DB because you could anticipate your opponent’s action would not be overpowered or out of character with the profession. These could ramp up and be used in more situations as the list progressed. I would also see these as instant spells so the bard’s magic would be useful to them right from 1st level.

This just needs the GMs approval, a DP investment and time for the character to do the research. That is what I would do.

5 thoughts on “Once Upon A Bard”