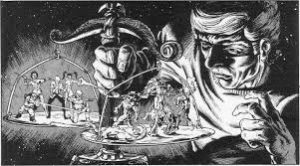 This coming Tuesday (last night when this post is published) I’ll be running the final chapter to my 5 part series: Legends of Shadow World. The last chapter could be a stand alone adventure but is the denouement to the adventure path, typing up a lot of loose threads and presenting the group with an incredibly powerful adversary.

I’ve been parsing some data from the previous 4 sessions and feedback from the other 2 test groups (chapter 1) and will probably run my group through the series again. It won’t have the surprise/reveal elements from their first iteration, but we’ll be able to have a more open analysis during game play.

RM has always been tricky in balancing encounters. DnDs Hit Point attrition system made matching groups and opponents more linear. Rolemaster criticals are the joker in the deck–a wild card that can immediately upend any possible balance a GM designs. This is not to say that the RM rules are broken at higher levels, but there are some immediate issues that are even apparent at lower levels.

Let me end by saying that my players have had a blast with these high level adventures. They get to play known personalities, utilize spells they only have ever read about in Spell Law, encountered some CRAZY opponents and adventured in very unusual environments.  But no matter how I adjust the encounter levels in these adventures, I’m not sure there can be anything like “Balance”.