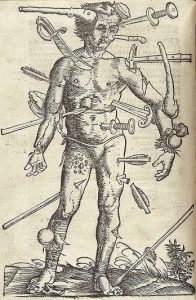 One of my recent posts discussed the basic concept of “Stats as Skills”. This ties into my whole experimentation with modifying the RM ruleset and creating a level-less game. Part of my research has led me to re-examining the whole concept of the “Saving Throw”. There has been a few other blog posts HERE and HERE.

Interestingly, Saving Throws are basically the same solution as Fate Points—a common house rule used by many RM players—but used IN ADDITION to RM resistance roles. Saving Throws were originally used to adjudicate powerful kill attacks (disintegration and dragons breath) predicated on a HEROIC assumption: unique and powerful individuals could somehow avoid a kill result based on luck, force of will or some superhuman effort. DnD established some arbitrary categories and situations that allowed for a Saving Throw and apparently in later additions switched to a stat driven resolution.

Rolemaster adopted the same conceit, but rather than a “all or nothing” approach, introduced a % of failure result (or the inverse of MM partial success) AND recognized the difference between “Resisting” a magical/metaphysical attack (RR vs spells) and “Avoiding” a physical/force attack (DB vs. Elemental Bolts). An improvement over DnD for sure, but is there a better way to handle RR’s?

Along the same lines, isn’t the use of both RR’s and Fate points allowing for double indemnity? It’s basically the same rule principle but gives the PC’s 2 mechanisms to avoid an unwanted effect.

I’m still playing around with various solutions, but have made a change in our upcoming session regarding Poison & Disease. Both Poison and Disease would seem to have little relationship to a PC’s level. They are physical, not meta-physical attacks, no different than an arrow or sword strike. A poisonous or viral attack is either delivered or not, and the impacts better addressed by the PC’s constitution and not level. So for Poison/Disease I’ve switched from level based attacks to the standard difficulty penalties to reflect the deadliness of the agent. (basically +30 to -100 although I use a broader, more graduated range). On the target side, the RR is now a Static Maneuver modified by the STAT (not bonus) plus any racial mods for Poison and Disease. So why the STAT and not the STAT bonus?

If the average player stat is 75 than a Routine +30 effect will be resisted pretty much all the time, barring a natural “01” roll. Results are than treated as a partial success/failure like any other MM/SM’s. A success still delivers the minimum effect since there was a successful bite/attack/puncture in the first place. Partial Success (76-100), Failure (26-75) and Absolute Failure (0-25) all induce the applicable effect categories.

Since I’ve moved Poison and Disease into a physical attack resolution all I’m left with for Resistance Rolls are Magic and Fear. I’m of the mind to make Fear also a level-less resolution, resolved with SD stat, with Fear attacks also defined by difficulty penalties like Poison and Disease.

That leaves me with Magic/spells. I’m still pondering this. Anyway, rolling Poison/Fear/Disease into the MM/SM resolution framework continues my push into a level-less game, better unifies game mechanics and doesn’t require any charts!!