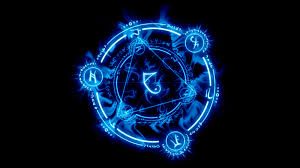 Rolemaster’s 3 realms (Essence, Channeling, Mentalism) creates conflicts and limitations. Certain spell lists never fit well in certain realms and casting mechanism were basically the same between realms even when the spell called for very different methods (alchemy imbedding, runes, circles, bard/singing etc). As part of our own Spell Law Redesign (Project BASil) we deconstructed the whole system and started from scratch. Step 1 was to define Realms into more specific parameters of effect and mechanism. During that analysis we found that we really needed to expand our system into more than the 3 standard realms.

The net effect has been a better delineation and flavor of magic between realms, the elimination of hybrid realms, more unique spellcasters and a better system for slotting in new spell lists. We also redesigned spells lists by power/similarity and not by a theme or Profession requirement. Our “realms” are: Essence, Channeling, Mentalism, Rendered, Notational, Investiture, Incidental, Intrinsic and Arcane Magic. Not all of these realms are equal: they vary in power, scope, ease of learning and accessibility.

Disadvantages: Limited target, no AoE, must concentrate to maintain effect, easiest to defend against

Disadvantages: Takes time to draw, subject to medium and materials

Disadvantages: Target must be aware of performance, performance must be maintained

Advantages: Very powerful but hard to control or predict outcomes.

Disadvantages: Not subtle or focused. Can create undesirable side-effects or collateral damage.

We’ve found that at higher levels in RM2 there is a little differentiation between casters. By 20th lvl casters can have almost all available spell lists in Spell Law. I prefer a system where casters have fewer spells overall and more defined abilities. Since we use a “NO PROFESSION” style in our SW campaign, mages-types have spells from at least 2 different realms and even fighter types pick up some spells. This makes for a very creative character creation process, broadens out the party’s skill sets and makes for “mages” with very specific and focused magic abilities. The advantages, disadvantages and costs of improving balance these abilities out.

If you want to see our revised Spell Law, we’ve posted early versions of our Channeling and Essence lists on the RM Forums and will have Mentalism up next!

The files can be found here, but need a Rolemaster Forum Account to see them and download them.

Channeling Lists . A compiled file is posted at the end.

Essence lists are here. Compiled file posted at the end

on a last note, there was some work done on this and an article written in the Guild Companion years ago but I couldn’t dig it up to link to.