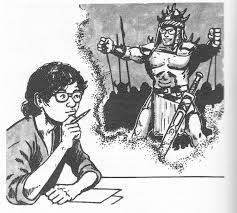 Search around the internet for Rolemaster discussions and you’ll see that a lot of people gripe about how much time it takes to make a 1st lvl character. Much of this complaining is grounded in the deadliness of the system: it sucks spending an hour or two on creating a character only having them die with a bad fumble or high critical roll in their first outing. I get it.

Even if you are an experienced RMer, you can easily spend an hour building a character and filling out the multi-page character sheet. But what if it only takes 15 minutes or so to make a character in Rolemaster? We’ve simplified and modified the rules enough that character creation is flexible, easy and quick…and…a player can make virtually any character type they want. The key is using “packages” to replace the normal Adolescent and Apprenticeship skill picks. We combine this approach with our own ‘no profession‘ rule set, but it can work for the standard professions rules as well. It’s also not an “all or nothing” proposition; players can still go through individual skill buy for character creation if they want, and normal skill selection is still used after the first level.

We recently added a player to our group so I had the chance to test my newer rules out. So how do we do character creation? First, I have a player sketch out their character concept and review the various skill packages (cultural and vocational—we’ll get to that in a bit). They now have strong idea of the character they want to play and probably a solid plan moving forward. This was done prior to, on their own time and I didn’t add it to the creation time, but, that conceptual planning certainly makes the quick creation time possible.

Step 1. Roll Stats. I have the players roll 11 sets (appearance stat is used) of 3 rolls. The lowest roll in each set is dropped, the next lowest is the temp and the highest the potential. There is no minimum threshold and there are no prime stats that can be replaced with 90’s, but the player can assign the stat roll sets as they see fit. We have started adopting innate stat skills, so every stat now has some important use. Time: 2-3 minutes.

Step 2. Choose a race & culture. Like RMU we use preset skill packages for various general cultures, races and specific SW societies. This replaces the original “Adolescent Skill Pick” step in RM. You can see some of the choices HERE (need RM Forums account to download).  Time 2-3 minutes.

Step 3. Choose a vocation/profession package. We have over 40 regular vocations to choose from, plus another 20 SW specific vocations. This replaces the “Apprenticeship Skill Pick” step in standard RM and represents the time spent after childhood in teen and early adult years. Vocation packages include cultural notes, type of training, years spent at vocation, skills, spell lists, established relationships, experiences, starting equipment, and wealth and property. You can see some of the choices HERE. Time: 2-3 minutes.

Step 4. Special Skill Rank Bonus. Players have 6 “points” that can assign as skill rank bonus(s)—sort of like aptitudes and replaces the normal assigned profession rank bonus. They have the choice of: (1) +3 OR (2) +2, OR (1) +2 and (3) +3 OR (6) +1 to assign to specific skills of their choice. This gives the player flexibility to really shape the character’s abilities and talents! Time: 2-3 minutes

Step 5. Pick Spell Lists if applicable. Cultural and Vocational Packages will give general and/or specific spell lists but some choices might need to be made. We individual spell pick. Time: 0-5 minutes.

Obviously with a spreadsheet version, steps 6 & 7 are almost automatic, reducing time further. In my player’s example, he chose a Fustir-Gost Shaman which gave him a good range of outdoor skills,  fighting ability, and practical Channeling magic. It took him 21 minutes to make complete his character.

A couple of points to emphasize:

Quick character creation doesn’t mean generic characters—50+ cultural packages and 50+ vocational packages allows for thousands of unique combinations. For us it’s a great solution for simplifying and shortening the Rolemaster character creation process and it may be a good bolt in when introducing new players to the game.