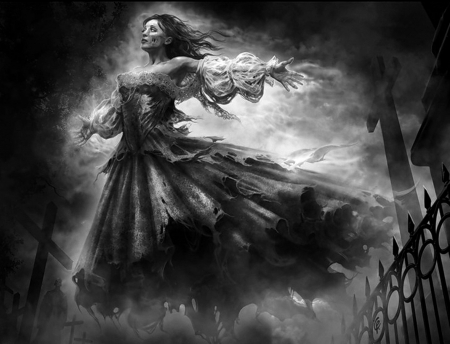 In the next session I will be throwing 5 3rd level PCs at a few 3rd level Rolemaster ghosts. The undead do not drain levels like they did in D&D back in my day. Rolemaster Ghosts drain constitution from your Temp stat which you need to rest to recover at a rate of a point a day of light activity or more for complete bed rest. This is a lot less devastating than losing entire levels

The objective of the confrontation is to try and bring the characters low by using a massively underpowered foe. It is sort of my chance to play something to the maximum of its ability and not have to hold back and just see how they all cope.

Using the ghost also means that I can justify all the bump in the night style of scary stuff without having to ‘break the rules’. Also in the Sinister Secret module there are a number of NPCs who are placed there to try and dupe the PCs and try and steer them away from discovering the smugglers. I don’t have the smugglers but I can replace the NPCs with ghosts and now they want to steer the PCs away from disturbing the ghosts earthly remains.

To my knowledge the players have never met a ghost before so it is one of those monsters that the rules lawyer in the party will not know exactly how to handle once they have even identified them as a ghost. You must remember that Rolemaster Ghosts appear like living beings at first glance.

In the past I have mentioned that one of my players has focused all hist development points into Perception, Body Dev, Weapons and Magic and nothing else. This adventure is the one where he will need a wide range of skills. I want to emphasise his lack of skills beyond combat. Looking back at Brian’s Consolidating Skills post this character is a warrior mage but lacks any of the magical skills that would allow him to identify the ghostly apparition. The ghost being incorpreal can walk through walls and doors but the character cannot pick locks.

The ghost can definitely effect the physical world as its primary attack is a medium claw attack so it can leave a room by walking through the door and then lock it from the outside without trouble. If can unlock a door and let the zombie hordes in from the outside if the characters take refuge inside the house. If can of course slam doors and throw open windows in best hammer horror style.

Not a hack and slash event

Going by the NPC roster in Sinister Secret I have 6 figures I can turn into ghosts if I wanted. In addition I am surrrounding the house with a graveyard that I can raise as zombies. I don’t want this to turn into a hack and slash event but I can use the zombies to push the characters into the house if need be.

I am quite looking forward to using a monster I have never used before and one that lets me achieve everything I want from a session.