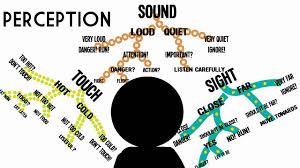 PERCEPTION: This skill affects how much information and how many clues a character gets through observation. It may be used to notice the right things, to find carelessly hidden objects, to see that pile of old clothes in the corner, to notice the imperfection in the wall that hides the secret door, the trigger for the trap ahead, the ambush. These are the type of things that the GM cannot mention to the players because to do so would call them to special attention that the character’s perception might not allow. (ref. Character Law)

Arguably one of the most important skills for any character to have is Perception. At least in my player groups, it’s a skill that is taken at least 1 rank every level. Why is it so important? Perception is the gateway for the game narrative. This is critical for table top role-playing where most information is provided by a GM through exposition. Information can be provided or withheld based on a players perception skill–it’s a throttle that can increase or decrease the game experience!

Like many elements of Rolemaster, the perception skill was probably based on the “find traps” or “detect secret door” ability in D&D. But RM perception is a massive expansion of that specific ability and it’s not just an active skill, but can be used as a passive one which greatly improves it’s utility. In my game it’s almost automatic that a player will announce that they are going to make a perception check. Basically what they are asking, is for any “hidden knowledge” based on a skill roll. For me, that’s very reductionist, it lowers the roleplaying experience down to a randomized game mechanic. And because every character in the group has perception, it’s also not uncommon for every player to make a perception check to maximize the probability of a successful result. Even if every character has an average +50 skill bonus, one of 4 or 5 players is going to roll high. At higher levels every character is a “crack observer”. No absent minded or myopic mages in my groups!

As a GM, I usually WANT the group to find secret doors and other mysteries to enhance their enjoyment or reward them. So having them able to perform successful perception checks can be important. On the other hand, these rolls also take some of the narrative control from me. Either way there is no denying the importance or impact of the Perception skill.

So what makes up perception? Quality of eyesight? Tactile sensitivity? Smell? Hearing? If that’s the case, than perception is based on innate physical abilities. Can you train up better vision? Teach yourself better hearing? Probably not. Perception should be purely physical based with an added emphasis on any racial ability.

Or is perception a trainable skill with “rules”, “systems” and processes that can be taught and learned? Aren’t spies taught the ability to notice small details? Are policemen taught to “detect” things? Aren’t soldiers taught to detect tripwires and boobytraps?

If perception is mostly physical capacity then perhaps it shouldn’t be a skill at all. However, if it is a trainable skill shouldn’t it be considered quite specialized and not classified as a general skill? Shouldn’t it be left to professions like thieves, assassins or mystics? Wouldn’t that make it more interesting for game play and give a cool niche role for certain profession types?

What are your thoughts?

10 thoughts on “Rolemaster Skill Deconstruction: Perception, is it even a skill?”