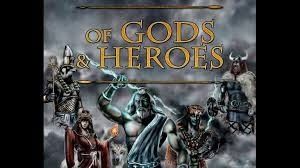 I write a lot about Clerics. One interesting phenomena, often featured in popular fantasy literature is the reluctant conversion or initiation of a character into an avatar or priest of a God. Perhaps the PC encounters the God during gameplay and creates an opportunity to pledge fealty. Maybe the God directly recruits the PC as his agent and follower or changes in the pantheons require the PC to choose a new God.

One of the limitations of RM is the inability to switch professions at later levels—precluding a PC from “converting” or choosing to enter a life of a Priest. Certainly a bit of hand-waving and rewarding the player with the appropriate Base List could work, but the PC would still have skill costs assigned by their original Profession choice. To me this is just another limitation of the Profession system; a system that was once advertised as having “no limitations”.

This also speaks to the awkwardness of emulating the Open/Closed/Base paradigm for the Channeling realm. Conceptually it doesn’t work well; was the reason I started my own re-write for Spell Law; and I suspect the need for the Channeling Companion. By its definition, Channeling ability must be given or granted by a God or God-like being. Rather than define Open/Closed/Base from an access viewpoint (a PC must spend DP’s to gain a spell list), it must be defined by a bestowed viewpoint (the God chooses which spell lists are granted–though the PC would still spend DP’s). In other words a God would likely provide Channeling spells to followers based on their need and their position in the church. So even low level admin or devout follower might have some lower level “Open” utility lists. This will just depend on the setting and as Peter pointed out, you could simplify all of this by just merging Channeling into Essence and Mentalism. My game allows for characters to access any or all of the “realms” so I end up with the same result using a different solution.

I like the idea and I like the dramatic potential of the ability to change religious loyalty and in the last few years have really embraced active gods in my Shadow World setting. As a Deux a Machina, I have more flexibility with a Lord of Orhan than a nosy Loremaster, and from a narrative standpoint I can provide unambiguous direction for the group when needed. Again, In my setting there is not difficulty in granting Channeling lists to a new convert—but how should that work in standard RM RAW?

Converting from one God to another is fairly straightforward: just replace current base lists with the lists of the new god. In regular RM this might not require any changes, as Clerics all receive the same Base spells. For people using Channeling Companion or have embraced the concept of God-aspected spell lists this would create a significant change in PC abilities. Can a PC willingly switch Gods—perhaps motivated by the powers/spells they might receive by changing allegiances? Fiction is ripe with stories about characters worshipping dark Gods for additional powers, but what about switching Gods within the same pantheon or “alignment”? Would the discarded God feel betrayed? Punish the PC? Would the new God require a Quest or some other token of loyalty before granting Aspected spells or even Power Points? I think this raises great adventure possibilities!

In the end, the narrative should drive the rules—right? But I would rather create flexibility rather than “one-off” rules to explain away system conflicts. Whether you use Professions or not, the Channeling Realm may benefit from some fluidity or tinkering in your game.

3 thoughts on “Seeing the Light—Religious conversions for Channelers in Rolemaster.”