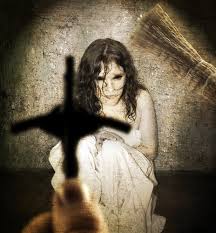 While I’ve posted up quite a few files, bits and excerpts from our Shadow World campaign over at the RM Forums, I put many of them up with minimal explanation or background. Since we are in the Halloween season I wanted to go back and discuss one of my posting in more detail: The Soulless or UnMen.

We’ve always run Shadow World as “monster-lite”, preferring the unique creatures (Shards, Gogor, Kaden etc) over the traditional ubiquitous fantasy RPG monsters. But generally my group is dealing with human/humanoid adversaries rather than fantastical ones. Shadow World does have one over-arching “foe”, the Unlife, but that tends to be an abstract malevolence that also raises quite a few questions. In our own campaign, we’ve made a distinction between good/evil and the Unlife and eliminated the entire “anti-Essaence” concept that further muddied the waters. We also distanced the Charon pantheon from the definition of “evil” to a more “chaotic” one.

But I did want a better mechanism to manifest the Unlife to my players and I also wanted to replace the traditional D&D Undead that can genericizes a SW campaign. Thus the “Soulless” (“UnMen” to some societies) so named because the hosts eyes turn black. The Soulless can occur in 3 ways: the animation of a dead body (“zombification” which replaces some Undead types and allows for Unlife Necromancy), the possession of a living host (replaces Demonic possession and ties into corruption of a person accessing the Unlife) and in some cases the Non-Corporeal manifestation of the Unlife (replaces Wraiths, Spectres etc).

I like this solution because it shoehorns into the existing spell system, ( “Turning Undead”, “Possession”, of Slaying “Evil”, detection of “Evil”), while it also replaces known, generic Undead with a setting specific adversary. Like Undead, we’ve built the Soulless into “Classes” I-VI with powers and abilities that increasing accordingly. Both Unlife animation and possession touch upon common tropes popular in culture: Fear the Walking Dead, Ash v Evil Dead etc, but add unpredictability and even paranoia to the group. Anyone or anything could be “infected” with the Unlife. Even better, it unifies differing and problematic mechanisms created by the “gap” between the RM ruleset and SW setting.

In this Halloween season, maybe it’s time to introduce your players to the “new and improved Unlife”: the Soulless. Game on!