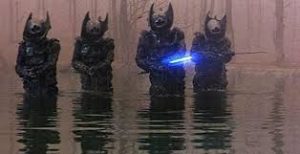 One of the bedrocks of the Shadow World setting are the detailed organizations that Terry has created: Loremasters, Navigators, the 8 Emerian Orders,  and the Dragonlords, just to name a few. These groups drive the plot and can be aids or foils for the players and be used throughout a lengthy Shadow World campaign.

One of the very first of these groups is The Iron Wind detailed in I.C.E.’s first publication. An order of Dark Priests (of High Imla Arna – “The Evil High Priests”), they were the secret tentacles of the Unlife that insinuated themselves into local cultures.  There were Six Orders described in the Iron Wind, along with a order of assassins known as Messengers of Syrkakang. This became the kernel that Terry expanded upon in subsequent books.

Jaiman, Land of Twilight expanded on the material in the Iron Wind with more information on the Priests of Yarthraak. At this point the Messengers were still “of Yarthraak”, but later were changed to “Gorath”. Frustratingly, the Messengers were only hinted at, and the only additional details were found in the adventure “Living Prison” and not the “Legacy of the Sea Drake”.  It wasn’t until Powers of Light and Darkness that Terry fully fleshed out the Six orders of Arnak, both Priests and Messengers.

Terry is fantastic at writing organizations with flavor and cool equipment, and in my opinion, the Messengers are some of the best for the PC’s to encounter. The Messengers can be seen as the militant arm of each of the six Orders of the Priests and have their own style and abilities. In my own campaign I treat the Messengers as semi-spell users; each has their own unique spell list to augment their inherent power and adds atmosphere to the encounters.

Why do the Messengers work so well?

So let’s review the various Messengers, where they can be found in books or perhaps how to introduce them into your Shadow World campaign. 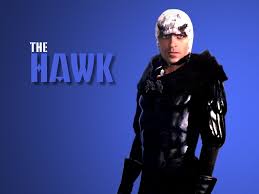 Description. The Messengers and their birds (both familiars and
mounts) reside in a great roost in the eaves of the Lyak
Tower, ready to serve the Priestess at a thought. The Messengers wear light green quilted cloth armor, blue cloaks of feather fall and wield swords and light crossbows.

My thoughts. As presented, Al-athuul are perhaps the least interesting of the 6 Messenger types, but would make great foes in Tanara and Urulan. Especially as combatants against the players hooking up with the Cloudlords–aerial battles anyone!!!! I added “Raptor Masks” to their kit to bring a more chilling appearance  similar to the other orders.

Where to find them. Messengers of Al-athuul can be found in the revised edition of Cloudlords of Tanara. They appear in the timeline in a few descriptions and as a possible encounter for medium level (6-10th) players. Messengers of Al-athuul would be great for a “cat and mouse” pursuit with the players on foot and the Messengers flying high overhead. This could create a fantastic tension as the group tries to escape or evade the Messengers with an occasional divebomb attack. Like the Stukas @ Dunkirk!

Spell List. My BASiL list for Lyak (the Priests get the list as well) was predicated on the concept of a “hunting bird” with spells that added more innate dread to the players (they are prey!). The combination of spells “Hunting Cry”, “Keen Eye” and “Dive Attack” allow the Messengers to circle high above on their mounts searching for targets. Then, when they find the players, they can cast their “Hunting Cry” and leap from their bird for an attack! 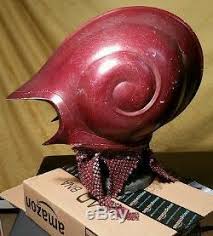 The Messengers of Gorath are outfitted with weapons
designed of materials that do not rust or warp if
wet, as they are often charged with errands that require
them to operate on or in the sea. Their clothing is of a
seal-hide that repels water and keeps them warm on
land or under sea. Their helms are fashioned like great
nautilus shells and allow them to breathe water as well
as air, and the armor of the Messengers is a lightweight
scale-mail made up of thousands of shimmering scales
of black mother-of pearl. Their gloves are covered with
shark’s teeth spikes. On land the messengers ride grey stallions, while at sea their mounts are killer whales they control with
special whistles. Each has a black seagull as a familiar.

My thoughts.  Their nautilus helm, possible water environments and the shimmering scale armor gives them a great presence. It reminds me of an old 70’s movie that had warriors from Atlantis emerging from the Sea.

Where to find them. The prominence of the Jaiman source book makes Yarthraak one of the better known Arnak orders. In addition they are featured in short adventure the “Watchtowers of U-Lyshak“. With so many adventure opportunities in South and Southwest Jaiman, the use of these Messengers is very flexible. If you have the players travelling by boat, an encounter with the Messengers would be pretty cool.

Spell List. My BASiL list for Yarthraak focused more on underwater environments where spells would be needed for the Messenger to act. 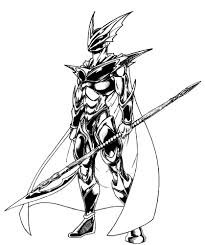 Description. The messengers’ helms are in the shape of a dragon’s
head and allow them to become invisible 3x per day.
Their white leather and steel gauntlets allow them to
strike with their fists as hammers, and their armor is of
white Wyvern hide.

Where to find them. These Messengers should be featured in any adventuring in the Mur-Fostisyr. They are found in The Iron Wind and Xa’ar books. 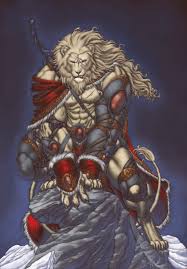 Description. Masters of snow and ice, the Messengers of Kulag
are at home in the worst arctic storms. They come upon
the unwary to fulfill the directives of the cruel priesthood.
Each is armed with a baw and wears armor made
from the hide of white Wyverns. They have reversible
white/brown cloaks, and gauntlets with retractable
claws—useful in combat and for climbing ice-walls.
Their boots are also equipped with cleats that allow
them to run on ice and packed snow with the same
ease as dry land. The Messengers ride great white Snow-
Cats and their familiar is a Snowy Owl.

My thoughts.  Kulag shares much of the same Northern Jaiman territory as Syrkakang so it’s important to differentiate the two. In Powers, Terry explains that Athimurl is more subtle and secretive, but that may be a bit lost on the players. While Gaath is also “snow aspected” I play up the Dragonman aspect of Gaath and allow Kulag to be the real “Snow Warriors”.

Where to find them. These Messengers should be featured in any adventuring in the Mur-Fostisyr, northern Jaiman and should be included in the upcoming Wuliris supplement Terry has been working on. They are also included in the Xa’ar sourcebook.

Spell List. I used this list to emphasize the Messengers ability to travel fast over snow and ice terrain. Powerwise, it might be one of the weaker lists for offensive spells, but Kulag have Snow Cats as mounts and should be formidable fighters. 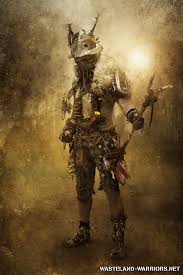 Description. Often accompanied by several large hyena-like dogs,
the Messengers go muffled against the dusty air of the
wastes. They have clawed gauntlets that allow them to
strike with the power of a great cat. Their helms are
fashioned to resemble dog-heads, with lenses in the eyes
to not only protect against dust but also allow the wearer
to see at night as if it were full day. Their armor is reinforced
leather, and each carries the deadly bola-like
weapon know as the gé.

My thoughts.  I love this faction. Wastelands, ruined cities, deserts, scavengers. It all has a very post-apocalyptic, Mad Max, feel to it that works great in Shadow World.

Where to find them. Messengers of Ulkaya are mentioned in Haalkitaine, but are featured prominently in The Grand Campaign. In fact, the Zorian Wastes (Part VII of the Grand Campaign) can (and should!) be inserted into any ongoing Shadow World campaign.

Spell List. My goal was to expand upon the feral feel that Terry has established. I was inspired by the feral dog/hyena aspect. 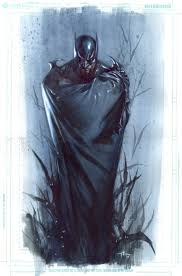 Description. Like the other Messengers, they ride through the
night on missions to bring fear to the indigenous peoples.
Their familiar is a huge black Bat and their steed is a
black stallion. More stealthy than most, they have voluminous
black cloaks like batwings, belts which allow
them to become Invisible, and helms fashioned like
frightening bat-heads which render them undetectable
by magic. In some regions these terrifying warriors are
called the Messengers of Kynagaax.

My thoughts. There is some confusion about the name of these Messengers. In Powers, they are known by Shaynar or Kynagaax. In Xa’ar they are named Kynagaax in the text, but labelled Chyna’ak in the Index. Certainly, they may go by different names by different cultures. Either way–these guys are evil batmans!!! I could add a ton of cool gear to their utility belts.

Where to find them. Messengers of Shaynar are mentioned in Haalkitaine, but haven’t really been highlighted in any works so far. The leader of Thargonaak is the Pale Man so Terry may have more in the upcoming Jaiman sourcebook. In my campaign, I have introduced these Messengers as enemies of Priests of Reann. They make a great nighttime encounter for the group.

If you haven’t used Messengers in your Shadow World campaign, give it a try! And, if you want to punch up their powers add the spell lists above for more interesting powers. Have fun!

6 thoughts on “Shadow World Overview: The Messengers of the Iron Wind.”