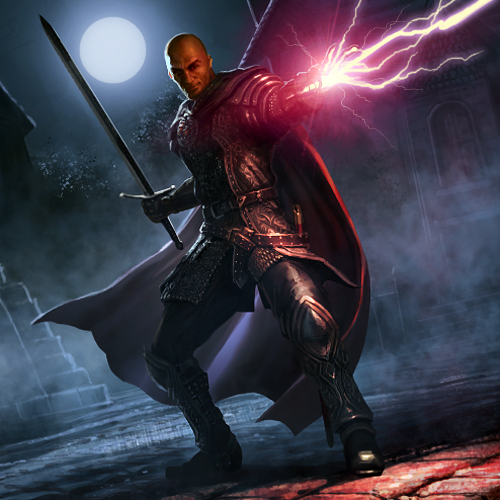 The Argument for the Class: To me, the Warrior Mage archetype is more recognizable than many classes already in Rolemaster – yes, Dabbler and Magent, I am looking in your direction! If you ask someone to tell you what a Warrior Mage, Dabbler, and Magent are, I am quite certain the vast majority will be able to give you a better description of the first profession than either of the two others.

The Warrior Mage archetype also has a longer history. D&D players call the archetype ‘Gish’. As Mark noted, the Gish has been around arguably since ‘Elf’ was a class in original D&D, when Elves could multiclass between Fighting Man and Magic User. It later took its unofficial name from the iconic Githyanki Fighter/Mages in Fiend Folio (one is on the cover, actually, as you can see below), though they were not yet a distinct class. The Gish was formalized in 4e DnD as the Swordmage class, which had many of the spells/feats the RM Warrior Mage exhibited (things like shield, teleportation, elemental attacks, etc.). 5e cut down on the number of classes overall, but has presented several Gish-type options in subclasses such as the Bladesinger. The archetype then is well established, as attested to by the many names it goes by, whether Gish, Swordmage, Spellsword, Warrior Mage, or several others.

–The Warrior Mage class first appeared in 1987’s Rolemaster Companion II. The original lists included the most problematic of all the Warrior Mage lists, Elemental Ways, which gave the WM all the best Magician spells in a single list.

I would like to make one important point on this original version of the WM, though: The class sure looked overpowered, but in practice he wasn’t quite as powerful as he seemed. He paid high costs for skills and spells, and on top of that needed to develop an additional skill (Transcend Armor) just to function in armor. His best mundane weapon cost was 2/7, Directed Spells came at 3/6, and Transcend Armor was 2/5, meaning an average character would be spending more than 50% of his entire DP allotment on those three skills alone (and that is with just 1 rank in Transcend). This doesn’t include buying the actual spells themselves (at a cost of 4/*), to say nothing of Body Development, Perception, or even Maneuvering in Armor itself. So I think part of the sharp difference of opinion people have on the Warrior Mage is a reflection of the difference between the people who merely read the Warrior Mage’s spells and those who actually tried to buy them. That said, I freely admit that Elemental Ways was overpowered.

–In 1989 came what was specifically described as ‘a variant of the Warrior Mage’ called the ‘Elemental Champion’ in the RM2 Elemental Companion. This toned down the WM by restricting him to a single element.

–Next, in 1990, was the RM2 Companion IV which offered a few more base lists to the WM (the Monk base Evasions and the Open Mentalism Illusions).

–In 1997, perhaps the biggest change happened in the Essence Companion, which attempted to rebalance the Warrior Mage/Elemental Champion as a way of converting him to the new edition of Rolemaster, RMSS. Here an attempt was made to address the elemental attacks issue by removing the ability to cast elemental balls altogether, and limiting the range of the Warrior Mage’s Shock Bolt to 50’. However, the RMSS Warrior Mage also got to use the same spell (not list, but actual spell: Jolting Blade/Flame Blade, etc.) to give her weapon an extra elemental critical until she ‘threw’ the bolt from it. That was arguably more powerful than an elemental bolt alone! And the RMSS version also allowed the Warrior Mage to use multiple different elements too (she essentially got Shock Bolt at level 3, Fire Bolt at level 8, and Lightning Bolt at level 18), with the higher level spells having greater range.

–Finally Rolemaster Classic gave the Elemental Champion another go, adopting the solution of having the class choose only one element, but retaining the ability to cast bolts (and at level 16, a ball too). This version also gave the class buffs/abilities based on its element (e.g. if you specialized in light you could cast Light).

Overall, then, I think it is fair to say that the biggest problem people have had with the Warrior Mage is balancing their elemental attacks. Each new version of the class has tried to get that balance right. I think we can all agree that the concept of a Semi-Spell User has always been at the very core of Rolemaster, but if the Semi’s spells are as powerful as the pure caster’s, then that isn’t very balanced. That, together with balancing skill costs, is the ultimate challenge of the Warrior Mage.

Ways to Balance the Warrior Mage: After appreciating this history and the challenges inherent in the class, I adopted these first principles/solutions to guide me as I created my own version of the Warrior Mage for RMU. These principles are:

–We can help balance the class’s Elemental Attacks by restricting each individual Warrior Mage to one chosen element. This solution also has pedigree, as it is almost as old as the class itself, and spans both RM2/Classic and RMSS/FRP. The class should not have access to Shock Bolt, Fire Bolt, Ice Bolt, and Lightning Bolt simultaneously!

–We can also promote balance by making some of the Warrior Mage’s spells self-only. Spells such as fly, shield, invisibility become less game-breaking when the WM can’t cast them on the entire party.

–One of the reasons the WM was unbalanced in earlier editions was that it got an optional self-healing list (the Monk’s Body Renewal). I don’t think this sort of healing fits in the repertoire of a semi-spellcaster of Essence, especially now that the Monk has been moved to Mentalism. So my WM has no more clotting spells, wound-repair spells, etc. That’s just not his jam. Every class needs an Achilles heal 🙂

–Finally, we can also use the new tools provided by the new edition of Rolemaster (RMU) to help balance the class. The new tools include new size rules (which can be used to ensure the WM’s Elemental Attacks are a step below those of the Magician), as well as clear rules for creating professions (which help ensure the Warrior Mage’s skill costs aren’t just the best costs for all the useful skills).

Skill Costs: You can hopefully now navigate to the RMBlog’s section Downloads>RMU and find my skill costs for the Warrior Mage there. I have used the RMU rules as written for this, because RMU provides an actual formula for assigning skill costs, and all classes in RMU follow this formula.

In the end, the RMU Warrior Mage’s costs are not that different from those of a Paladin (though the two professions have different spellcasting Realms of course). This cost similarity makes sense to me, since both are martially-oriented semi-spell using classes. Thus, if the Paladin’s spell costs are balanced in RMU (and I think they are more balanced than in any previous edition, because  RMU finally has a system for balancing them), then I think it is fair to say that the Warrior Mage’s costs are finally balanced now too.

Spell Lists: I looked through all the old spell lists for the various versions of the Warrior Mage/Elemental Champion in all previous editions and came up with the following six base lists. They represent a distillation and rebalancing of the old spells:

–Warrior’s Bridge is similar to earlier WM movement lists as well as the Closed Essence: Lofty Bridges. Note that the WM can still take Lofty Bridges as a closed list, at a relatively high cost, but the WM-specific version is cheaper, with the downside that it tones down some of the spells by making them caster only. So if you want to be able to fly, you can make a Warrior Mage. But if you want to be able to make your entire party fly, you’re much better off choosing to be a Magician.

–Warrior’s Element tries to balance the WM’s elemental attacks. It gives the WM the ability to make a bolt, ball, and wall, but only of one element: like the old Elemental Champion, my WM has to decide which is his ‘chosen element’, and can only cast elemental attacks of that chosen element. Furthermore, this list also uses the RMU size rules to ensure that a Warrior Mage’s elemental spells are a step behind the Magician’s in power level. Thus for example, the Magician gets a normal-sized Shock Bolt at level 2, but the Warrior Mage’s version of the spell would be size ‘small’, meaning it does only 75% concussion hit damage, and gets a 1 critical severity reduction. So when the Magician’s Shock Bolt does 24C, the Warrior Mage’s would only do 18B. The Magician still reigns supreme for pure elemental power.

–Warrior’s Shield is based on previous WM shield spells, and provides the basics such as Shield, Blur, Deflections (available to most other classes on other open/closed lists), and some elemental defences. The WM could already access many of these on Closed Essence lists, but these ones on his base list are tailored a bit more to the WM’s elemental focus. They are balanced primarily by only affecting the caster.

–Warrior’s Weapon is based on some previous WM/Elemental Champion lists, especially ones that buffed her weapon with elemental damage. I’ve tried to balance these by comparing them to similar spells at the same spell level on other lists in RMU Spell Law; I tried to keep the levels as close as possible.

–Warrior’s Will is loosely based on some of the WM/EC buff lists, but I’ve added some more utility in terms of buffs to skills such as Attunement (which I think a class like Warrior Mage is especially well suited to, given their combination of arms and spellcasting). And as per my basic balancing principles outlined above, I have removed the self-healing spells.

–An Elemental List: For the final list, I recommend that each WM take ONE list corresponding to his element (the same element that he chooses for Warrior’s Element) from the Elemental Specialist lists in Fire and Ice: The Elemental Companion (RMSS). These give really great flavor to the elemental utility lists because they are focused on a specific element. The Earth list Earth Mastery for example includes the ability to oxidize or sharpen a metal weapon, create a corridor through stone, etc. I am currently working on updating these lists for RMU, but they are mostly usable already, and help to distinguish different builds/varieties of Warrior Mages.

So, if you have some time, definitely take a look at these lists and let me know what you think!