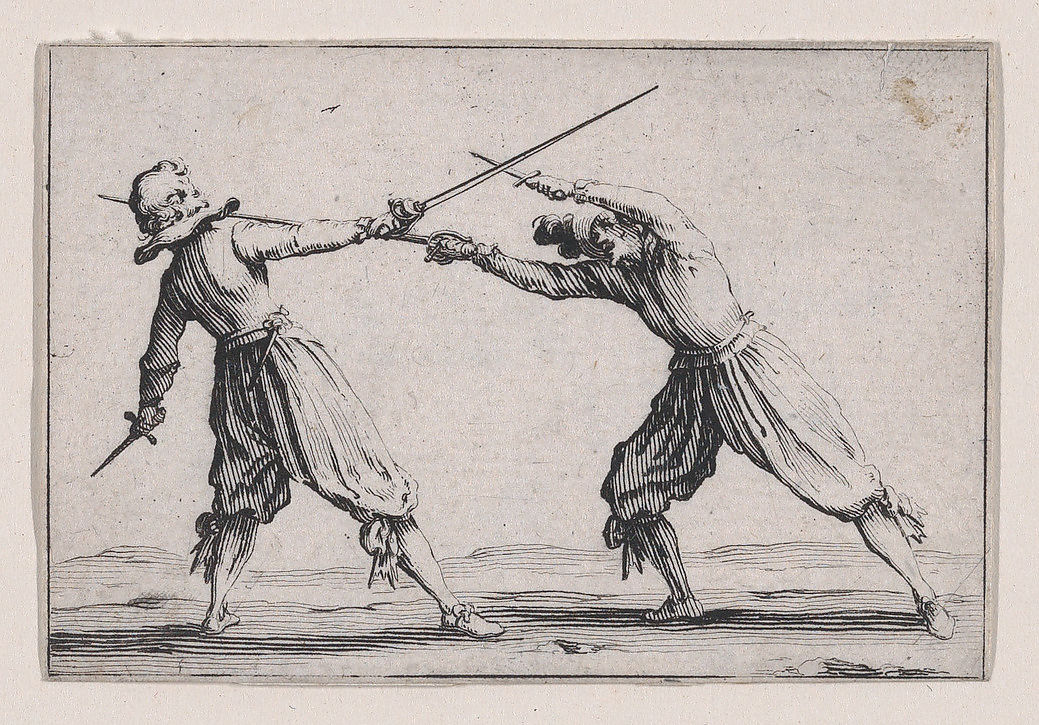 There is a guy on one of the OSE Discord servers I lurk in that reminds me a lot of Hurin. He isn’t Hurin under a different name unless Hurin has a secret double life in Australia, but that is beside the point.

This guy is one of the big personalities in the OSR/OSRIC/DnD nerd community. He happened to say the line that is the title of this post that two 10th level fighters dueling with daggers was a low point of DnD.

It was a throwaway line but it struck a chord with me. I can see the scene being imagined as two guys, probably with 60-70HP grinding away hours doing 1d4 + strength bonus damage when they did manage to hit. In old school DnD a combat round was a minute long. This fight could go on for hours.

Except that it doesn’t.

There are two flaws in this thinking. The first is that if a challenge carries no risk and has no consequences to the character’s story then you shouldn’t be rolling for it. The other flaw was the idea that 1d4+ strength bonus was damage, it isn’t.

I will take the second flaw first. The very concept of hit points is widely misunderstood. Hit points are your character’s skill, and an element of luck at avoiding being hit or harmed. In Rolemaster terms, it would be like having a finite pool of Parry that you burn through adding it to your DB.

That description of Hit Points was in the original Dungeon Master’s Guide. It would be ridiculous to think that just because a character had had a successful adventure or two, that they could now survive being stabbed with a sword more times. Hit Points as skill at parrying, dodging and evasion make perfect sense in contrast. This is why Fighters get more hit points than Magic-Users, they are trained to parry, dodge and evade. You Con bonus is not because you are ‘meatier’ it is because fatigue can slow a person’s reactions when parrying, dodging and evading.

DnD and Chainmail evolved out of tabletop war games where typically a unit that was hit was destroyed. To introduce named heroes into that needed a way for them to have more than a ‘one hit, you are dead’ mechanic. The core concept that if you are stabbed with a sword, hit with a mace or stabbed with a dagger, you will die unless someone saved you. That is why HPs go down to -8, each describing the severity of the mortal wound.

Those are the rules pretty much as written in the original DnD.

The next problem with our two 10th level fighters is the hour-long combat. Knowing what hit points are has eliminated the idea of them each being stabbed 15 times and still standing. We have turned that into an interplay with both fighters lunging, feinting, dodging.

The problem is that the first half of the battle is of little or no consequence. You cannot kill a 10th level fighter is a dagger strike. Many strikes may but the first definitely won’t.

It is relatively easy to eyeball a battle as GM, or DM in this case, and see that Fighter 1 has a slightly better to hit number and slightly better damage due to a bigger strength bonus. Why not play the first round or two, let the Character get the size of his opponent. Ask the player how he intends to play out this fight, underhand and dirty or is it more an elegant gentleman’s duel? Now skip forward 10 rounds. If one fighter is more likely to land hits than the other then one takes four dagger strikes and the other may only take three. You can make sure that the number of hits and the damage is in line with the actual abilities of the two combatants. Now describe how the fight went up until this point. Is the other fighter the better or more skilled fighter? Is he or she using their strength to their advantage or is their speed frustrating your attempts to corner them? Tell the player what the character would know. If the character went into this thinking it would be an easy win but now finds themselves at a disadvantage they may want to change tack.

You get the player’s input and then skip forward another 10 rounds. Deal out typical damage and describe the impact this duel is having. Where was the fight taking place? In a banquet hall? In a clearing in the woods? Are there seconds standing by looking concerned? 10 more rounds have gone by, you could be down to half hits and your opponent is looking a lot fresher and more confident than you. What do you do?

By now it is possible that one or the other is at half hit points. Does that change their perception? Is the duel taking place in a larger context? Is now the time to concede honorably?

You can now skip forward another 10 rounds. At this point, you could if you wanted to, play out the rest of the combat. The banquet hall could be a complete wreck with tables upturned, benches smashed to smithereens and the floor awash with trampled food. From this point on the actions can have real consequences, the rule to not roll for things that don’t matter no longer applies.

What could have been a grinding hundred rounds of roll to hit, roll 1d4 for damage has been avoided and turned into narrative description in which the player gets to take an active part.

So What About Rolemaster?

A RM2 10th level Fighter probably has about a 100OB with dagger. Based on one rank per level of half of their sword skill, about +18 from Stat and +30 from Professional bonus.

Assuming this is an unarmoured fight in a banquet hall, just because I like the idea of food fights, with both combatants using AT1. They need about 90 to make contact with each other and about 100 to do a critical.

Just eyeballing it suggests that you would need to do a typical 4 E criticals to take someone down, they are fatal or debilitating 25% of the time. So we are looking at possibly 1 in 20 x 4, or 80 combat rounds. I would say that the first bleeding critical on either side would finish the fight. Not so much from breeding out the penalties from lost hits would wipe out your OB, reducing your ability to deliver any damage and reducing your parry DB.

Almost all E Slash criticals do bleeding and 2-4 hits per round are common.

For all their training and experience, a Rolemaster fight between two high level fighters will actually be decided, more often than not, but the very first lucky roll.

You could even strategize for this. Fight until you have that first crit and then all-out parry until your foe bleeds out.

Looking at RMu and there is a bigger issue, passive DB inflation. Our 10th level fighters are likely to have +20 ranks (at least) in Running. By 10th level, you can have a decent Qu bonus with is x3 for DB. If you parried with +50 of your OB, you are looking at +80DB vs a +50OB, a net -30 on your attack roll. Open-ended is needed to even do hits of damage and a 96+50 attack roll yields only 4BP. I know that JDale has increased the damage in the RMu tables but they have not made 4 and a B puncture equal to 16 and an E slash critical.

I am not known for using things like exhaustion points but it looks like having to wait, a statistical average of, 20 rounds just to do 4 hits of damage. A fight like this could last three-quarters of an hour for the characters and take days of real time to play.

The chances of the fight coming down to just a lucky blow, probably a double open-ended roll is more likely than any actual skill on the part of the combatants.

This does not seem right to me.