A mixed bag of stuff this weekend; a combination of Random Musings, Weekend Roundup and Commentary on Rolemaster, Shadow World, news, and my projects in the queue. 3. Real life tomb treasure.  Sealed vaults filled with gold, silver, gems and jewelry are just a fantasy or legacy of a time long past? I think not. This is the last unopened tomb–in 2011 another tomb in the same temple was opened to find treasure expected to be valued at over $500M!!!!

4. Cool Statues. I blogged about cool statues last year. Here is a new one I just read about: The Appenine Colossus. Within the statue there are “countless caves, water cascades and ravaged by time mechanical, hydraulic and acoustic devices intended to amuse and impress any visitor of the park.” 5. Priest-King of Shade. Depending on final feedback from Terry and Nicholas I may be posting up my SW module for free here on the RolemasterBlog. It will be mostly formatted, but many of the maps are hand-drawn. I’m looking to purchase clip-art to include to punch things up a bit. Any advice on the best place to look for art? Deviantart? RPGNow? I like old school line art over renderings but open to anything. Priest-King clocks in at over 150 pages with maps, charts and illustrations so it covers quite a bit of material. The module covers the peninsulas in SW Agyra: 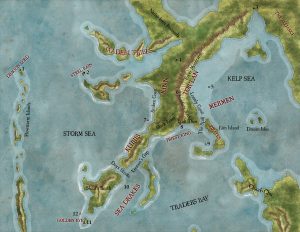 Here is a quick blurb I wrote a few years ago:

Agyra. Far from the historic events of Emer and Jaiman, this region has been cruelly shaped for thousands of years by both natural cataclysms and the powerful flows of Essence.  Scattered and isolated tribes are a faint legacy of a powerful nation that sunk beneath the waves in millennium past.  Monolithic blocks scattered along deserted coasts and leagues of enigmatic ruins lying in shallow waters are remnants of a lost civilization.

However, these lands are not dormant. Powerful nations and secretive groups are at odds: a war of not just arms but of politics and commerce. Into this conflict a new power has risen. A mysterious Priest-King and his devout followers have occupied an ancient citadel and are slowly expanding their power across the lands.  For the tribes that inhabit the coasts and jungles, these newcomers are viewed with outright fear. Rumors of demonic armies, dark cults, missing children and empty villages have cast a pall throughout these lands.

But adventurers have come nonetheless. Ancient ruins have been discovered: a sprawling city lying submerged in the shallow waters off the coast of Agyra. Many believe the ruins date millennia back to the First Era and holds untold wealth and the secrets of the Ancients!

The Priest-King of Shade is a module detailing the lands of South West Agyra. This product contains a regional guide, maps and layouts of key places, detailed description of key NPCs and 10 adventures ready to play.  Designed for players levels 5-15th.  Will you confront the minions of the Priest-King?

My group has playtested the whole module–it’s quite extensive and is the prelude to “Empire of the Black Dragon” that runs up to 25th+ level. Plus, I have another 5-10 other side adventures that I will publish over time that fits into the region. I’m outlining the city of Nontataku which would be integral to both but would fit well as the 1st Chapter for players 1st to 5th or so. I’m expecting Nontataku to run about 100 pages and Empire is around 80-100 so all together it would be a great long term campaign. With add-ons they all could hit 500 page count w/o extensive artwork.

6. The Book of the Pales. I was at 32 pages w/o charts but added in some supplementary stuff on the Void Knights. I think it’s going to push well past 50 pages. It’s a Shadow World supplement for adventuring in the various Pales.

7. Legends of Shadow World. Since this is meant as a stand-alone Shadow World tourney series I’m keeping each chapter to 10 pages or less. But…I think I’m going to flesh out the “Temple Complex” which will add quite a few layouts and GM notes. I hope to have Chapter 1 ready for download by the end of the month. Again, I’m prowling for good artwork with a budget of $50/chapter. Any suggestions are appreciated.