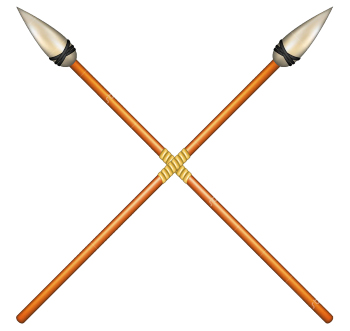 In my previous post A Safe Place To Camp I used a warband of Goblins as the force against the players. 19 Goblins used at top efficiency could do serious damage to any party of almost any level. Any arror or crossbow bolt in their case can get that open ended attack roll and deliver a killing blow. Organised ranks of light crossbow goblins loading and firing upon command can do serious damage particlularly to low level parties.

Defending Yourself in Rolemaster

Your defence in Rolemaster is a matter of natural ability through your character stats, physical protection through shields and armour, defensive skills such as ‘adreanal defence’ or ‘yado’ and then magic on top of all that. Most of these things add a positive bonus to your DB (Defensive Bonus) that is taken away from your attackers dice roll. Low level characters in Rolemaster generally do not have that much magical protection or the best armours this means that even a relatively unskilled crossbow goblin has a chance to hurt you. Multiply that by volleys of six bolts at a time and the odds are in the goblins favour.

On the other hand if the goblins are in disarray then they are a completely different proposal.

In all flavours of Rolemaster using a long weapon such as a halberd or spear gives you an advantage to your initiative in that first round of combat. This si because you can hit your opponent before they have finished closing with you. After that first round then the sheer length of the weapon is a bit of a hinderance. In rolemaster because wounds tend ot have a last effect, not just knocking off hit points, if you start to lose then you are likely to carry on losing in a vicious circle. Getting the initiative and then attacking first is valuable. Here our goblins, if they are allowed to get organised, can bring a lot of long weapons to bear on the characters and all with that initial initiative advantage. On the other hand if they are not given that time or using stealth the party can get in amongst them before the fighting starts then the characters have the advantage and are more likely to attack first. All damage is applied instantly in Rolemaster so if you stun your opponent then they are not going to hit you back.

Rolemaster is dangerous and wounds hurt. Parrying is the norm in combat. Just the same as you see in the movies where the protagonists circle each other probing for weaknesses in the others defense, so it is in Rolemaster combat. You can sacrifice some or all of your attack to deflect your foes attack. Our goblins though will find that hard with such a big weapon as the spears and polearms. They are pretty much half a good as a sword for parrying. This means that in this adventure the characters almost certainly will have to potential for greater defence and a better offence than our goblin defenders.

It really is a GMs call to decide how good a general Spartak the Goblin is and how he can organise his war band. Without changing a single number or creature in the adventure you can make this a warming up exercise for a new party to a humbling experience for a hardened bunch of adventurers.

What you should avoid is a total party wipeout as that is rarely ever fun!