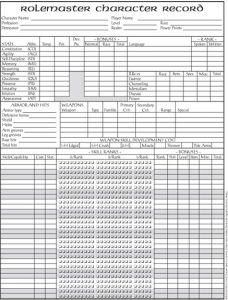 I’ve been reluctant to comment directly on RMU; the rules are still in Beta and I’ve already decided what pieces to adopt in my own game. I think there is a lot of fantastic stuff in RMU–some of it inspired me to modify my own house rules or change the way I think of an RM mechanic. That’s a positive sign for any new rules in a system played predominantly by older games who are fairly set in their ways. Early versions of RMU inspired me to make wholesale changes to my game. In all honesty,  despite the time I’ve spend re-writing Character Law and Spell Law, I was never going to tackle Arms Law. I just didn’t have the interest or patience in re-writing the attack tables–but they did need work. So thanks for that guys!

My last blog, I talked about the need for RMU to fully integrate a game setting. But let’s talk about the most over-arching criticisms of Rolemaster, deserved or not: character generation (chargen) and “chartmaster”. Do a google search: “rolemaster chargen“, “rolemaster chartmaster“, “rolemaster system” etc. Scan through the results. Read other RPG blogs that discuss Rolemaster. Putting aside comments about grittiness, granularity, verisimilitude and deadliness, the most common comments about Rolemaster are the length of time of character generation and the profusion of charts. This isn’t my opinion–it’s intertwined with the Rolemaster brand.

Here are a few examples:

However, character creation and, even more so, levelling up, is where the system’s crunchiness really shows. I think its even accurate to say that the massive crunch of the system is very front-loaded. Making a new character is a session-long endeavour, I used to dread going up in level, because it meant another 15 – 20 minutes of calculations

Does RMU address or solve these 2 most common criticisms?

I’ve already blogged about a variety of ways that RM(U) can reduce or eliminate charts. I’ve also blogged about character gen in 15 minutes. Both discuss my own solutions for these two cited issues. Those are just my solutions, and per the comments, there are many people who don’t agree. So let’s just tackle the base question.

Unifying the various rules systems and updating the ruleset are great goals. But if the two most frequent criticisms of Rolemaster are left unaddressed, how does the system move forward with a new player base?