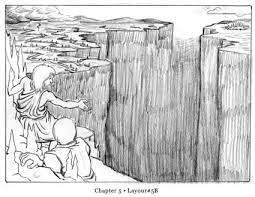 A recent forum thread started me thinking about the “tensions” between a game setting and a game system. Specifically rulesets and worlds published by the same company (not like Peter’s use of FR for his RM game). Certainly Greyhawk and Forgotten Realms were designed to incorporate the full breadth of the D&D rules, but what issues are created when a game world doesn’t fully embrace the system it’s meant to support? MERP is a good example of this. The original modules used the RM rule set, but that rule set never really fit the low magic world of Tolkien. ICE eventually introduced MERP, which stripped out many of the professions to better fit the setting.

So let’s examine RM (in all its’ variations) and Shadow World. The two always seemed slightly “out of phase” to me. While some argue that SW is very “kitchen sink”, it has elements and mechanisms that break from normal RM standards. RM’s origins as a slot in system meant that it duplicated a lot of D&D material and had quite a bit of generic content. Shadow World however, is a very specific setting that often throws away RM rules or requires some re-calibration to make things work just right. Some examples:

This ambiguity between RM and Shadow World is much different then Numenera whose rule set and setting were created hand in hand. The setting informs the rules and the rules drive the setting.  Is there a solution? Does there need to be one? Perhaps not, but it probably doesn’t help to have this divide between the rules and the setting. Like MERP before it, I think the Shadow World setting would be helped by having a modified RM rule set.

Can you think of any other companies that have a rule set and setting that don’t quite match up?

5 thoughts on “Rule sets and settings. The gap between Rolemaster and Shadow World.”