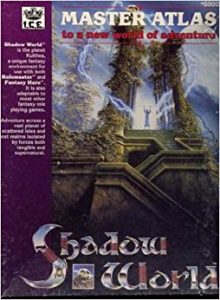 With every new product Terry Amthor publishes, the world of Kulthea grows larger and more detailed, but it’s been quite a while since an updated version of the SW Master Atlas was produced. In truth, there has been a tremendous amount of world building material generated, but it’s been scattered among the various SW supplements over the last 30 years.

In general, a setting’s “Master Atlas” should contain the overview and broad strokes of the world—the foundation that sets the table for all other material. It should differentiate between “world spanning”, “universal” and “ubiquitous” and material that is regional in nature. Using that very basic definition you could argue that the Loremasters and Navigators are Master Atlas material while the Eight Orders of the Emerian Empire are not. Certainly, some of this is arbitrary, but if a new Master Atlas was planned, what should be included? Part of it is consolidating this “world material” from existing products and the other is filling in the blanks—new material that fleshes out the world, answers important questions or establishes setting specific material that might be different than general Rolemaster rules. (see the blog here)

IIRC, Rolemaster Companion I was generated from the “Red Book”—a notebook filled with optional material used in the early days by key ICE employees and playtesters. The material was cleaned up and made into Companion. We have our own version of the “Red Book”—our own Master Atlas that consolidates all “world material” into the existing MA4 text (converted in editable Word format). We went through each product, starting with the Iron Wind, and added any pertinent material: languages, creatures, Loremasters, artifacts, key persons etc. When a new product comes out, we go through it and do the same thing; our current MA stands at 320 pages without the numbered timeline and without fauna/flora. With fauna/flora our comprehensive MA would be well over 500 pages without artwork and graphics. Is that too large for todays consumers?

Some of that (100+ pages) is our own material—some of it posted up on the Misc SW Files. What is the origin of Elves? What happened to the Earthwardens? Where did the Dragonlords come from? What is the origina and the genesis of the various monsters/creatures? What are the reasons behind “magical” alloys? What is the background behind the lack of chemical processes in SW? We wrote it out of necessity, much of it years ago when it wasn’t clear if SW would continue. I think we came up with some good answers to many of these questions—but ultimately may be modified based on new material Terry produces.

Even with all the material we have, plus the material we’ve written I think there are gaps in the Master Atlas. After 4 versions, it’s probably not a priority for Terry to tackle the Master Atlas yet again even as he updates other past regional products. But…if such a product were to materialize, what would you like to see in it? Here are a few of my own:

1.       Language etymology. Matt did some work on it and I tried some basic classifications but it would be nice to have a basic “language tree” based on the root languages and sub families to build a framework for future products and establish relationships between cultures for language skills/translations etc.

2.       Essence Flow and Foci Map. While I like the idea of not creating permanent Major Flows, they are a key part of the world. Nexus is surrounded by them; Tanara was isolated by them etc. There was a map from an earlier product (Emer in the Atlas Addendum) but I think reintroducing these permanent flows helps fix the Flows as an important physical manifestation of the setting.

3.       Setting specific creatures. Much of the flora/fauna of SW is just a duplication of Creatures & Treasures. This feels like shoe horning a generic fantasy framework into a more unique setting. I would prefer to see a broadening of SW specific bestiary: more fusion and bizarre creatures.

4.       The Pales. Something I’ve been working on is added material on the Pales: environment, more denizens, realm powers etc. It would be great to have them fleshed out as real places that could be visited or used for travelling. My group is currently in the 2nd Pale and pushed me to build the setting out more for the adventure.

5.       Finished SW specific spell lists. Additional spell lists for the Unlife (type specific rather than general) and the other groups detailed in Powers of Light & Darkness.

6.       Finalized and consistent rules about the Unlife. Eliminate the “Anti-Essaence” and create framework for channeling (?) the Unlife and corruption rules.

Just a few of my ideas—anybody have any other ideas for the “definitive” SW Master Atlas?