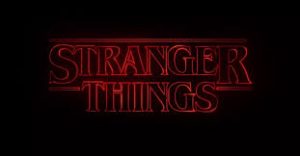 I thought I would go a bit off normal topics to discuss Netflix’s most recent series: Stranger Things. The series is a nod (actually more of a trope head-butt) to 80’s science fiction and fantasy and written and directed by brothers steeped in early fantasy gaming. The show starts with a group of boys playing D&D in their basement—the game narrative establishing the plot and structure of the rest of the series.

Unlike E.T., which depicted some type of RPG’ing, the boys in ST are clearly playing D&D and the show references the game several times—plus it contains a few D&D product placements as well. These young boys are the protagonists of the story, and while they are characterized as “brainy nerds that get picked on”, the show clearly frames them in a positive light. The values of trust, loyalty, friendship between the boys is clearly contrasted against the shallow friendships of the bullies and popular kids. In a longer story arc, character redemption is not portrayed as the nerd who triumphs and gets their girl but as the popular rich kid who learns the lessons of friendship and learns humility. (Pretty in Pink?)

Without tackling the technical details of filming, it seems that almost every shot is evocative of an 80’s movie. On the most basic level, the show is an homage to Spielberg, Carpenter, Stephen King and Cameron but tropes and references are so dense and wide ranging that they still keep popping in my head.

Just a few that struck me:

There is no doubt that early 80’s gamers have become key players in Hollywood/TV myth making and this show is a love story to that era. I think it was a positive depiction of gaming and just maybe it will spur a few 40-somethings to get back into gaming or teach their kids!

What references did you pick up on?

4 thoughts on “STRANGER THINGS: A tropey love story to the 80’s.”