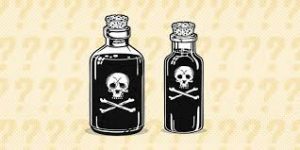 Poisons, diseases, curses. Oh my. In the earliest days of D&D, adventurers not only had to avoid traps, navigate mazes and defeat monsters, they had to contend with other insidious agents like poisons, level drains, curses or cursed objects, petrification and the diseased touch of the Mummy.  Not really a safe vocation when you really think about it! While much of the Saving Throw/Resistance Roll mechanic was built around these attack types, how often do GM’s really use these “dark things”? How often do you introduce poisons & diseases in your campaign?

D&D made many challenges fairly simple. Curses could be countered with a particular spell, poisons could be Saved or cured etc. They were designed to be yet another discrete challenge that has to be overcome. A binary mechanic: effect vs. cure. D&D didn’t bother with specific poison antidotes (unless part of the narrative) or even causation (what is a curse and why so prevalent in D&D). You Saved and you were good, you failed and you had to seek out a singular solution.

Rolemaster introduced a more realistic system for many of these challenges; and poisons were definitely more detailed! Not only were there many poisons, they were defined into 5 types, had specific antidotes, and had varying levels of effects. A similar approach was taken with diseases and whole spell lists were devoted to varying curses whose effects spanned the realm of imagination.

A few years ago I took a critical look at my own campaign and GMing proclivities. I realized that I rarely used diseases, never used curses (or at least hadn’t for many years) and was reluctant to delve into poisons.  Now I see these interesting affects as not just a quick add-on but great additions to my narrative toolkit. Let’s take a look:

But “dark things” are not just limited to poisons, disease and curses. Beyond these traditional agents, Shadow World may provide a bevy of interesting taints, attacks and complications that can add to your campaign. Here are a few thoughts and ideas:

Demonic Possessions. I’ve blogged about the problems with summoning and demonic possessions should be based on the particular setting. But Shadow World does have Demons, so it’s possible to have Demonic possessions beyond the thematic demons introduced by Terry. Having a player possessed could make for interesting sessions: Demons may not have any particular agenda beyond being a chaos agent and maybe they even impart some Demonic powers (like Frenzy).

Mental Illness. Introducing a mental illness to a player really relies on their roleplaying skills, but can add a interesting twist to group dynamics. Traditional Mentalism spells can cause mental illnesses, but how should they work and manifest in game play. Serious illness beyond phobias and violent tendencies are going to be metagamed by the player, but a players that really commits to it can be a lot of fun even if it gets the group into trouble.

Unlife Taint. There has been several attempts to mechanize Unlife taint in past GC’s and some other thoughts on the Forums. Obviously there needs to be corruption rules for SW. Should this work as a player accesses “Dark” spell lists? In my own campaign I differentiate between “dark” lists (that are the result of the Gods of Charon) and “Unlife” spell lists which tap into an alien, malevolent power. These lists are the various Priest Arnak lists I posted up on the RM Forums, and the lists Terry made for the Steel Rain and other Unlife organizations. Ideally, the Unlife lists should be really different from standard SL lists and more powerfully to justify and entice spell users to explore and experiment with them–and start down a slippery slope. Unlife corruption should be a core rule mechanic for SW. The concept of players “flirting” with learning and casting powerful Unlife spells and risking being corrupted or subsumed by the Unlife is a great fantasy theme.

Channeling Block. A priest who defies their god, behaves in a inappropriate way or similar should be punished. The quickest and most obvious is to sever them from their spell casting ability until they make atonement for their actions. This atonement process is a natural trigger for an adventure or quest!

God Cursed. Similar to the disfavor in a channeling block, a character could get a “mark” that shows they are cursed, outcast or disfavored by a god. This could be in the form of a birthmark, shaped scar, change in eye color, or symbol that can be seen in the person’s skin (excommunication). This would be an ill omen in most cultures, and make it difficult for the player to interact with society.

Just a few ideas that I need to explore in more detail or finalize as rule mechanics. RMSS and RMU have introduced Flaws that are similar to these, but I like for fluidity to these more than CharGen mechanics to offset talents. What has been your experience with “Dark Things“?

7 thoughts on “Adding “dark things” to your Rolemaster and Shadow World games.”