Broadcryers are part of the fabric of life in Waterdeep. These are the newspaper hawkers that we know selling the single page ‘broadsheet’ short scrolls that are popular in Waterdeep.

Short scrolls are a single sided scroll maybe 20cm by 30cm (8″ by 12″) that pass for a newspaper. There are several available and each is printed within the city. The most popular are ‘The Vigilant Citizen’, ‘The Blue Unicorn’, ‘Daily Luck’ and ‘Northwind’.

As a rule they carry tabloid style tittle tattle, scandle and rumours as much as any real news. The writers of the short scrolls are a mix of anonymous perveyors of rumour, often in reality scribes who become privy to private affairs through their work or through overhead snippets of information and semi professional reporters of news. The concept of ‘Journalism’ does not exist but chroniclers of events have been around since the dawn of the written word.

As a GM I absolutely love the short scrolls. Based on the premise that with all tabloid journalism 99.9% is made up crap designed to sell newspapers I can use Broadcryers to bawl out headlines which could be ‘rumours’ fit for investigation by the party of PCs, complete fabrication, events spun off from different PCs operating in the same area or a way of introducing colour and flavour into the world, names of important NPCs and what they are up to.

In the same way that Freddie Starr never consumed any hamsters I am in no way constrained by the truth. 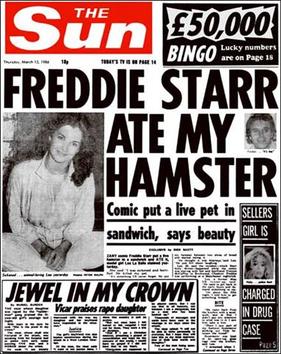 Something that is interesting though is that according to all the official Forgotten Realms publications (City of Splendors: Waterdeep, Blackstaff Tower and Downshadow) these are printed not hand written. The printing press revolutionised fifteenth century Europe. As soon as you allow printing presses into the world you open a pandoras box of potential uses for this technology. If you look through Spell Law ways of mass duplication is something that is not are covered by the normal spell lists. Possibly you could use a Prosaic list for this or research a suitable spell but as it stands this is something that technology can do that magic cannot.

The reason Broadcryers and their short scrolls came to mind is that all week I have been making up stories to fill the short scrolls for my PBP game. When rules, reality and even truth are all optional it is really good fun creating little newspaper stories.